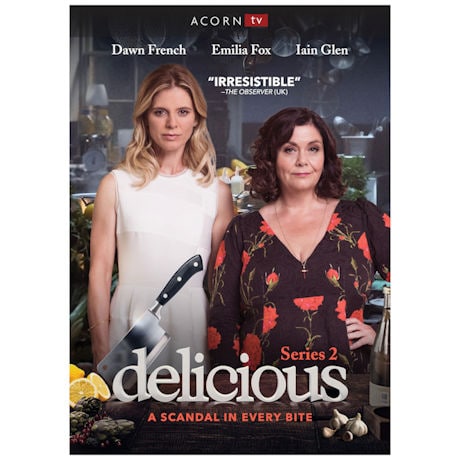 $34.99 $29.99
BUY 2 OR MORE SERIES, SAVE 10%
Share Me:
add to wish list
Overview
Food and love meet in this lavish British dramedy set amid spectacular Cornwall landscapes. It's been almost a year since the sudden death of philandering chef Leo Vincent (Iain Glen, Game of Thrones, Jack Taylor), but his presence at the Penrose Hotel is more palpable than ever. Dawn French (The Vicar of Dibley, Lark Rise to Candleford) and Emilia Fox (Pride and Prejudice, Silent Witness) star in a series full of surprising twists. 4 episodes, 3 hrs, 1 DVD, SDH. Mature content.
Episodes
Episode 1
It's been almost a year since Leo's death. Gina and Sam have turned the Penrose Hotel into a profitable business, but they still have their disagreements. While Gina attends to her estranged father, Joe, Sam hires young chef Adam without Gina's approval.

Episode 2
To Gina's frustration, Joe refuses to leave the hotel. Michael returns home and conspires with Gina to plan a surprise party for Sam's 40th birthday. Worried about what happened at her last visit, Teresa wants to quit therapy.

Episode 3
Gina prepares an elaborate feast for the anniversary of Leo's death, but she clashes with both Sam and Teresa before the memorial. Gina finds money missing from the stash and suspects that someone in the Penrose has been stealing from them.

Episode 4
Gina tells the family about Adam's true identity, but Michael lashes out and Sam threatens to leave the Penrose. While Gina prepares for her wedding, one of the staff finds the stash of money and notifies the police.


DVD Extras
• Cast and crew talk about the characters, the food, the setting, and what's new in series 2. (10 min.)
• Behind-the-scenes photo gallery