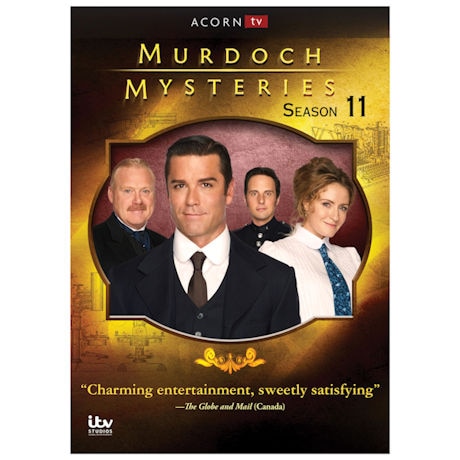 $59.99 $29.99
22 Reviews Write a Review
Item #: XC1272
Set in Toronto at the dawn of the 20th century, this "Victorian CSI" (Wall Street Journal) explores the intriguing world of William Murdoch (Yannick Bisson), a dashing detective who pioneers innovative forensic techniques to solve some of the city's most gruesome murders. At the start of Season 11, Murdoch languishes behind bars, framed for the murder of a burlesque dancer END_OF_DOCUMENT_TOKEN_TO_BE_REPLACED
Add to Wish List

Set in Toronto at the dawn of the 20th century, this "Victorian CSI" (Wall Street Journal) explores the intriguing world of William Murdoch (Yannick Bisson), a dashing detective who pioneers innovative forensic techniques to solve some of the city's most gruesome murders. At the start of Season 11, Murdoch languishes behind bars, framed for the murder of a burlesque dancer and battling a corrupt bureaucracy in order to prove his innocence. 18 episodes, 13 hours, 5 DVDs or 4 Blu-ray discs, SDH. Mature content.

Ep. 1: Up from Ashes
Murdoch languishes behind bars for the murder of a burlesque dancer, while Julia remains missing. As the station mourns the loss of two of their own, Detective Watts covertly works to clear Murdoch's name.

Ep. 2: Merlot Mysteries
When the father of the groom drinks poisoned wine during his toast to the wedding couple, Murdoch and Watts investigate Toronto's community of wine lovers. Now finished with her schooling, Rebecca looks for a new job.

Ep. 3: 8 Footsteps
Murdoch and Julia attend an experiential dinner in the dark honoring Helen Keller, but when the lights come back on, one of the guests is dead. Murdoch works with Alexander Graham Bell to uncover the culprit.

Ep. 4: The Canadian Patient
At the Toronto Medical Exposition, a surgeon approaches Murdoch claiming that his organ-transplant operation was sabotaged, resulting in the death of his patient. Brackenreid's son John joins Station House No. 4.

Ep. 6: 21 Murdoch Street
An Indian diplomatic couple approach Murdoch for help finding their sons, who went missing from a prestigious boarding school. When none of the other students will talk, John and Crabtree go undercover at the school to find out what they're hiding.

Ep. 7: The Accident
A traffic accident causes havoc on a Toronto street. While attending to a victim whose injuries are more severe than they originally appeared, Murdoch discovers that one of the motorcars may have been sabotaged.

Ep. 8: Brackenreid Boudoir
While on a camping holiday, Murdoch and Julia discover a man stabbed through the heart. To catch the killer, Brackenreid picks up the paintbrush again to infiltrate an artists' group that the victim had associated with.

Ep. 9: The Talking Dead
When two men die after seeing their own obituaries in the newspaper, Murdoch tries to protect other people with fraudulent obituaries who are still alive. To Crabtree's disappointment, Nina considers a job in Paris.

Ep. 10: F.L.A.S.H.!
A switchboard operator reports receiving a strange call, and hours later a man is found dead with a coded note in his pocket. Murdoch's investigation brings him to an investor's meeting for a high-speed transportation invention created by James Pendrick.

Ep. 11: Biffers and Blockers
Murdoch and Julia attend an amateur cricket match that turns into a crime scene when one of the players is blown up by a ball filled with explosives. Murdoch suspects that the intended target may have been a Serbian count.

Ep. 12: Mary Wept
Julia begrudgingly attends church with Murdoch, but they both receive a shock when a newly unveiled statue of the Virgin Mary appears to weep blood. The clergy believe it to be a miracle and try to stop Murdoch from investigating.

Ep. 13: Crabtree à la Carte
Margaret and Crabtree participate in a cooking competition sponsored by a canned beef company, but the insult-hurling judge is poisoned. Crabtree fears for his life when he thinks he consumed tainted meat.

Ep. 14: The Great White Moose
After a night out with President Theodore Roosevelt, Murdoch and Julia are summoned by Terrence Meyers to help solve the murder of a Spanish intelligence agent who was electrocuted in a locked room. Meyers suspects a legendary assassin called El Noche.

Ep. 15: Murdoch Schmurdoch
After the perpetrators of an anti-Semitic riot are taken to the station, the owner of Toronto's first Yiddish theatre dies onstage from a stab wound. Murdoch interviews the performers while John becomes enamored with a vaudeville singer. Ep. 16: Game of Kings
A young boy claims to have seen a winged knight on horseback kill a man with a lance. When the victim is identified as a Russian chess master, Murdoch sends Crabtree, aided by Nina, to infiltrate a chess tournament.

Ep. 17: Shadows Are Falling
Julia faces a serious health scare with devastating consequences. Later, Rebecca's sweetheart, Nate Desmond, comes to Murdoch for help after he is charged with murder, and the team must band together to help save him from the noose.

Ep. 18: Free Falling
To avoid returning home after his argument with Julia, Murdoch helps a man searching for his missing wife. Back at the station, Watts investigates a dismembered torso while Crabtree considers making a drastic life change.