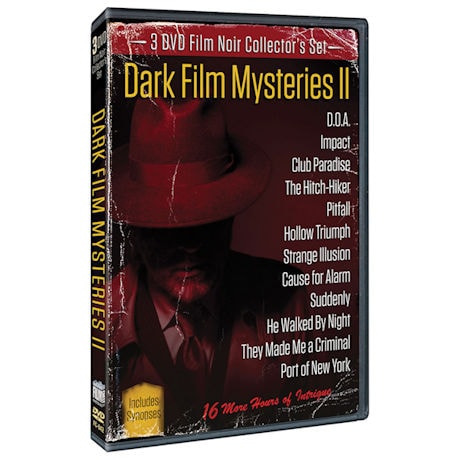 D.O.A. - A California businessman shows up at a police station while on holiday to report a murder. When the police captain asks who was murdered he says, "I was!" With days to live he desperately seeks to discover who is responsible for his pending death. One of the great film noir classics of all time

Impact - A top level but naïve businessman suddenly finds himself the target of his scheming wife and her calculating boyfriend. In a stunning twist, Donlevy's character goes into hiding and assumes a new identity as a garage mechanic, allowing everyone to believe he's dead.

Club Paradise - A naïve young factory worker living in a bad family situation, goes to work in "Club Paradise" as an exotic dancer. She meets the handsome and suave, but troubled, new stranger in town, Danny which leads to romantic intrigue and, ultimately, murder.

The Hitch-Hiker - On a fishing trip two pals stop to pick up a hitch-hiker whose car has apparently broken down. What happens in the close confines of their car, provides for one of the scariest villains in the history of film noir.

Pitfall - A ruthless sociopath (Raymond Burr) is willing to destroy all in his path to secure his objective to possess a woman's body and soul despite her unyielding rebuff to him.

Hollow Triumph - Med school dropout-turned-master criminal John Muller puts together a major casino heist, not everything goes as planned. He assumes the identity of a psychiatrist, Dr. Bartok (plays both roles), requiring him to scar his face to match Bartok's, resulting in unforeseen consequences. This psychological thriller is pure vintage film noir.

Strange Illusion - An ex-con sets out for revenge on a young small town man and his widowed mother for being sent to jail by their recently deceased father and husband, a judge. Using a new name, he enters their lives, becoming a love interest of the mother. What was the mystery behind the death of the judge?

Cause for Alarm - Loretta Young vividly portrays the every housewife of the 1950's, caring for her sick and dying invalid husband, who believes she is having an affair with the doctor and that they are conspiring to kill him. This concern prompts a letter of the murderous plot by the dying man to the District Attorney. Once mailed, he dies. Was it an accident?

He Walked By Night - In an understated but brilliantly shadowed noir film, a cold-hearted loner kills a policeman and the search for the killer begins. A sociopath who steals electronic items manages to elude the police because he listens to their radio communications, runs through the LA sewer system.

They Made Me a Criminal - John Garfield stars as Johnnie Bradfield, a boxer hiding from the police (as Jack Dorney) after believing he committed murder while he was drunk. Jack shows just what kind of man he is by not fighting the big fight and against all the odds, dramatically winning the "life fight" at the last moment.

Port of New York - Suspenseful, gritty, and fast paced, Port of New York follows two narcotics agents, who are on the heels of a gang of murderous drug dealers and their illegal distribution of opium from ships docked in the New York harbor. One of the agents is killed and the other goes undercover to bring down the gang. Filmed entirely on location in New York City.