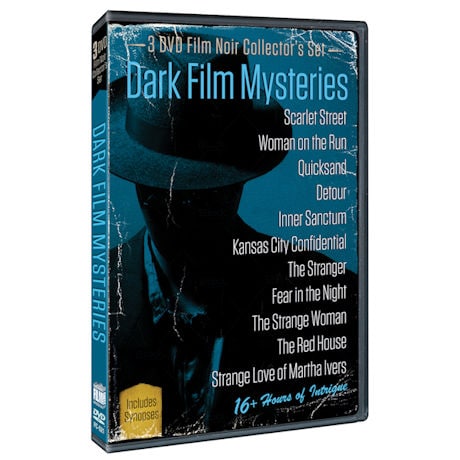 Scarlet Street - Edward G. Robinson plays an amateur painter going through a mid-life crisis who befriends a younger woman and convinces her he has a fortune. The woman's boyfriend persuades her to try and con him out of the money with disastrous results.

Woman on the Run - Frank Johnson is an eyewitness to a murder. It turns out the victim shot was a witness in a court case against a gangster. With Johnson in hiding from the mob, his wife Eleanor (Ann Sheridan) suspects he is running away from their failing marriage.

Quicksand - An auto mechanic (Mickey Rooney) borrows money from his employer's cash register to go on a date with a woman he deemed out of his league. Soon, he finds he cannot keep up with the money he stole and the demands of his new love interest, pushing him deeper into a world of debt and crime.

Detour - Tom Neal plays a New York City piano player that decides to hitchhike his way across the US to California. Just when his luck seems to be changing, he runs into disaster and is placed as the prime suspect in a murder. His only option is to hide out and try to find his girlfriend, who has established herself on the west coast.

Inner Sanctum - When a man (Charles Russell) is convinced he has committed the perfect crime, nature intercedes and forces him to be stranded in a small town with the only potential witness.

Kansas City Confidential - Joe Rolfe (John Payne) is an ex-con on the road to rehabilitation when he's framed for a million dollar robbery staged by Tim Foster (Preston S. Foster), a vengeful former cop. Embittered and determined, he sets out to find the real criminals to render justice himself.

The Stranger - Orson Welles directs and stars as Charles Rankin, a professor residing in a quiet Connecticut town with his new American wife, Mary (Loretta Young). Rankin has held strong to his fascist ideals but left nary a shred of evidence, not even a photograph, to identify him as the notorious Franz Kindler, until Mr. Wilson (Edward G. Robinson) shows up with a plan to change that.

Fear in the Night - A meek and mild bank teller awakens one morning from a disturbing dream in which he has killed a man, only to find that his dream may well have been real. Was he sleepwalking? Was he hypnotized?

The Strange Woman - The Strange Woman follows beautiful Jenny Hager (Hedy Lamarr) as she grows up to become an equally heartless and manipulative young woman, finding she can always get what she wants from the men in the 1820's port of Bangor, Maine.

The Red House - Edward G. Robinson plays an aging farmer with a dark secret he's trying to keep hidden from Meg, who he and his sister Ellen (Judith Anderson) have raised since her parents mysteriously disappeared. As she grows, she is warned against wandering into the nearby woods, where terrifying screams have been heard in the night emanating from an abandoned red house. But, curiosity threatens to get the better of her.

Strange Love of Martha Ivers - Martha Ivers (Barbara Stanwyck) is an heiress-turned successful businesswoman who has spent much of her life bearing the burden of a horrific childhood event involving her domineering aunt (Judith Anderson), while subsequently enduring an unhappy marriage to Walter (Kirk Douglas); that is, until her childhood sweetheart shows up in town.