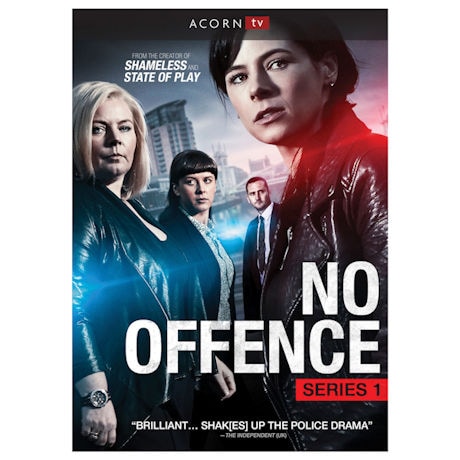 No Reviews Write the First Review
Item #: XC2592
Creator Paul Abbott (Shameless) delivers a police procedural with a difference. Set in a crumbling cop shop on the wrong side of Manchester, the darkly comic series follows a group of tough but big-hearted officers, led by the highly capable but unquestionably unhinged DI Vivienne Deering (Joanna Scanlan). Deering and her crack team often resort to unconventional methods in order END_OF_DOCUMENT_TOKEN_TO_BE_REPLACED
Add to Wish List

Episode 1
After a harrowing experience, DC Dinah Kowalska learns she's on the shortlist for a promotion from her no-nonsense boss, DI Vivienne Deering. Later, Dinah connects a body at the morgue to a series of murdered girls with Down's syndrome.

Episode 2
Dinah invites Cathy, the girl she saved, to stay at her house, but their arrangement causes trouble for the investigation. After watching a teenager overdose, Viv and her team trace a bad batch of drugs to a wealthy couple.

Episode 3
The squad crashes the wedding of a neo-Nazi to charge him with a firebombing that killed a Pakistani woman. When the suspect claims to have an alibi, Dinah and her colleague DS Joy Freers believe the arson may not have been a hate crime.

Episode 4
Dinah attends to a man who walked out in front of a car to commit suicide, but the case becomes more complicated when the police inform the next of kin. Viv's team desperately searches for a missing girl, concerned she may be the serial killer's next victim.

Episode 5
Police respond to a stabbing and discover that the victim has a secret identity. Having connected the serial killer to an online dating site, Forensics Officer Miller poses as a teenage girl to lure the culprit, while Dinah tries to mend her broken relationship with Cathy.

Episode 6
As Viv frantically chases down Cathy's attacker, the squad makes a startling realization. When the pursuit doesn't go as planned, Viv's team stumbles upon a seriously injured young man. Meanwhile, Dinah has doubts about the serial killer investigation.

Episode 7
Viv and Dinah suspect the killer may have received inside information from someone in the police. While Dinah searches for the mole, Viv investigates the shooting death of a surgeon who was killed while jogging.

Episode 8
Viv struggles with the identity of Cathy's rapist, while Dinah urges her to make an arrest. To add to Viv's stress, one of her subordinates is threatened with a manslaughter charge after he fails to save a man's wife and baby.