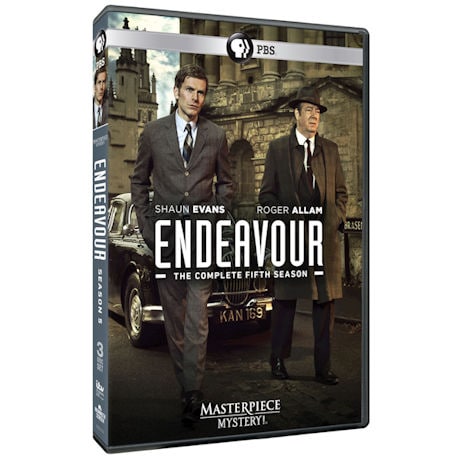 $39.99
3 Reviews Write a Review
Item #: XC2692
Shaun Evans charms audiences with his portrayal of the younger version of crusty Inspector Endeavour Morse in this highly successful and cerebral prequel. Season 5 is set in 1968, a year of change and challenges for Morse and his colleagues. But in Oxford, crime never sleeps, and the team continues to be tested by mysterious and intriguing cases of murder, END_OF_DOCUMENT_TOKEN_TO_BE_REPLACED
Buy 2 or More Seasons, Save 10%
Add to Wish List

Shaun Evans charms audiences with his portrayal of the younger version of crusty Inspector Endeavour Morse in this highly successful and cerebral prequel. Season 5 is set in 1968, a year of change and challenges for Morse and his colleagues. But in Oxford, crime never sleeps, and the team continues to be tested by mysterious and intriguing cases of murder, greed and deception. Will things at Cowley Police Station ever be the same again? 6 episodes, 9 hrs, 2 DVDs or Blu-ray discs, SDH.

Film 1 — "Muse"
The auction of a priceless Faberge Egg attracts the attention of an infamous international thief — and the new Thames Valley Constabulary — as Endeavour investigates. He's soon distracted by the gruesome death of a known gangster. But when a history Don and the auction's organiser both meet similarly grisly ends, he suspects the three cases are connected. The hunt is underway to find a ruthless and violent serial killer, and track down the next victim before it's too late. At the station, a new recruit arrives to become Endeavour's apprentice.

Film 2 — "Cartouche"
Hollywood glamour comes to Oxford as the stars of a new horror movie begin filming in the city. Meanwhile, the unexplained death of a former detective sergeant leads Endeavour and Thursday to a local cinema, which is playing host the film's stars in a special event. The case takes a turn when another man is also dramatically killed. The film's star is convinced a mysterious Egyptian curse is to blame, and Endeavour and Thursday find themselves uncovering long-kept secrets and the truth behind a hero's past. Thursday entertains estranged brother Charlie and finds his generosity tested.

Film 3 — "Passenger"
Endeavour investigates the disappearance of a local woman. Things take a surprising turn when a woman's body is discovered at an abandoned railway station; Endeavour realises it's more than a simple missing persons case. The discovery of another body blows the case wide open - and leads to an unlikely culprit. Meanwhile, Thursday is absorbed in the investigation of a lorry hijack — which he suspects is linked to local gangster Eddie Nero. Soon, Cowley is disrupted by the arrival of two burglary squad officers, commandeering Fancy for their plans — whose investigation leads to an important new clue.

Film 4 — "Colours"
A photoshoot on an army base turns sinister when a model is found dead. The investigation is complicated when they discover Sam Thursday is involved. With Thursday side-lined by protocol, Endeavour and Strange take the lead — the first time without their mentor. Tensions rise, and the pair clash, pushing their friendship to breaking point. When another body is discovered, Endeavour uncovers family secrets, political affiliations and thwarted love affairs to find the truth. Elsewhere, a racial protest outside a hairdressing salon turns violent, while a new relationship and new hobby give both Endeavour and Thursday hope for the future.

Film 5 — "Quartet"
A death at an international sporting event opens a new case for Endeavour and Thursday, but their investigation is quickly brought to an unexpected end. While Thursday wants to step away, Endeavour is determined to find out more, and secretly undertakes to discover the truth. While Endeavour chases down the real story behind the death, Thursday attempts to protect a battered wife from her violent husband. When tragedy strikes, Thursday must make a tough moral decision about how to administer justice. Away from the case, Endeavour has to face up to heartbreak with an unexpected departure.

Film 6 — "Icarus"
When a teacher mysteriously disappears, Endeavour finds himself investigating the hidden world of a public school. When a body is unexpectedly discovered, Endeavour must question who he can trust and find the killer before it's too late. With Cowley Station closing, Thursday is determined to crack the unsolved murders linked to Eddie Nero, and charges Fancy with tracking down the suspects, with horrific results. In the shadow of tragedy, Endeavour and Thursday find some unexpected answers to their cases. Meanwhile, Thursday's brother returns with news and Endeavour is forced to look to the future.