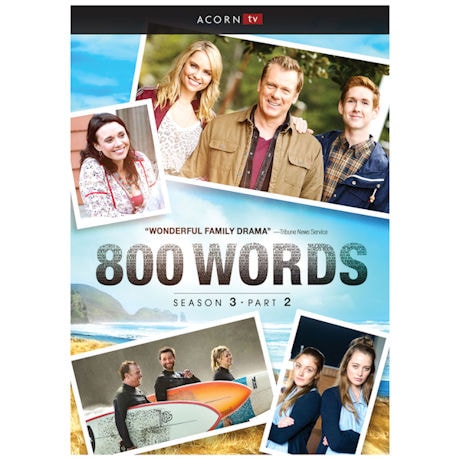 $49.99
BUY 2 OR MORE SEASONS, SAVE 10%
Share Me:
add to wish list
Overview
Not long after the death of his wife, a grieving father quits his job as a popular 800-word columnist for a top Sydney newspaper and moves his two teenage kids to a small town in New Zealand. With picturesque scenery and quirky locals, this Aussie-Kiwi breakout hit will delight fans of Doc Martin. 8 episodes, 6 hrs, 2 DVDs, SDH. Mature audiences.
Episodes
Episode 9
As the citizens of Weld speculate about who George accompanied home after Woody and Tracey's wedding, George discusses his love life with a vision of Laura. Arlo tries to figure out what he did to make Lindsay lash out at him.

Episode 10
George and Katie worry that their new relationship will hurt Fiona's feelings, but Fiona is upset for other reasons. Shay and Siouxsie join the fire-brigade boot camp, and Hannah helps an unwilling Tom with his police physical assessment.

Episode 11
George and Katie plan their first vacation together, but instead of a romantic getaway, they end up on a crowded camping trip in winter. As George competes with Katie's ex, Zac, Shay unexpectedly runs into Ike's new girlfriend.

Episode 12
Arlo struggles to break up with Lindsay, despite already beginning a new relationship with Poppy, a situation that makes Arlo's friend Billy uncomfortable. Big Mac tries to track down Ike to work on the Weld tourism video, but Ike is busy "chasing angels."

Episode 13
Big Mac reveals his ulterior motive for making the Weld tourism video, causing the citizens to unite against the neighboring town of Stafford. George and Woody can't seem to mend their friendship until Hannah intervenes, and Shay joins Ike on a quest.

Episode 14
George's in-laws urge him to get involved with the sentencing of the driver who killed Laura, which puts strain on his relationship with Katie. Shay and Siouxsie pick up a handsome Australian hitchhiker.

Episode 15
Still upset after her confrontation with Katie, Shay avoids the Turner household. Poppy faces bullying on social media before the school ball, and the election for president of the New Republic of Weld heats up.

Episode 16
George and Fiona confront Big Mac about his plan to change Weld. With Shay going back to school and staying with her father, Katie rents a tiny house-truck, and Poppy's mom comes to visit Woody and Tracey.