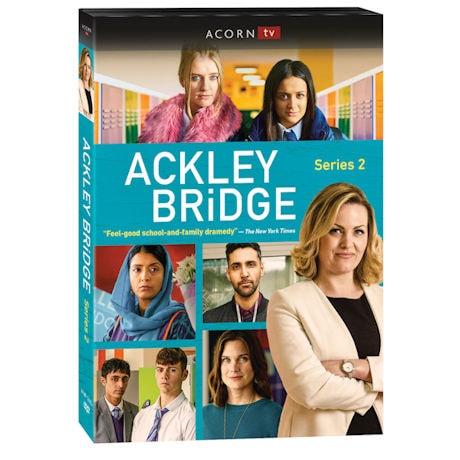 No Reviews Write the First Review
Item #: XC5362
After years of racial segregation in a small Yorkshire mill town, two high schools combine into Ackley Bridge College, integrating white and Muslim students. But the transition is far from easy for teachers, students, or the community. Tackling issues like racism, homophobia, and religious discrimination, this timely dramedy is an insightful look into modern-day Britain. With Jo Joyner (EastEnders) as END_OF_DOCUMENT_TOKEN_TO_BE_REPLACED
BUY BOTH SERIES, SAVE 10%
Add to Wish List

After years of racial segregation in a small Yorkshire mill town, two high schools combine into Ackley Bridge College, integrating white and Muslim students. But the transition is far from easy for teachers, students, or the community. Tackling issues like racism, homophobia, and religious discrimination, this timely dramedy is an insightful look into modern-day Britain. With Jo Joyner (EastEnders) as headmistress Mandy Carter. 12 episodes, 12 hrs, 3 DVDs, SDH. Mature content.

Episode 1: Sham
In a bid to disguise her sexuality, Nasreen has agreed to a sham engagement with Naveed, who is also in the closet. When both the school's enrollment numbers and exam results plummet, Mandy institutes a strict academic regime that causes uproar among staff and students alike.

Episode 2: Dad
Jordan promises to pay for half of Jamie's christening but can't fulfill his end of the bargain when the Murgatroyds go all out for the event. Missy has money troubles of her own, so she skips school to pay off their debt to a loan shark, but Emma is determined to get her back into class.

Episode 3: The Single Life
Now navigating life as a single woman, Kaneez has an emotional and sexual awakening. Samir helps Emma convince the Pakistani students to audition for the new school production, while Missy's relationship with Aaron brings out Hayley's insecurities.

Episode 4: Channeling Anger
Riddled with guilt over his affair, Samir seeks redemption by getting Jordan off the streets and into boxing, but his efforts force him to confront a vengeful person from his past. Encouraged by Missy, Nasreen goes out on a date but freaks out when the girl comes on too strong.

Episode 5:Someone to Talk To
Desperate for a girlfriend, Nas turns to a dating app and falls hard for a Pakistani girl—but Sameera may not be as perfect as she appears. As Emma deals with her grief, Steve invites a rugby scout to watch Cory play.

Episode 6: She Is Fierce
Missy hits the roof when school gossip about Hayley and Riz comes to a head, and her overprotectiveness for her sister rebounds on her own love life. Meanwhile, a devastated Emma goes AWOL, leaving the school production in chaos.

Episode 7: Chicken
Nasreen has a memorable encounter with the feisty Sam Murgatroyd, but their burgeoning romance may be stymied by their different backgrounds. New deputy head Javid Shah arrives and recommends starting an LGBT support group, while Mandy clashes with Steve over a possible suspension.

Episode 8: The Family Way
Mandy is hit with a series of emotional crises, as she deals with the news that she is pregnant and then her abusive father turns up at school, suffering from dementia. Razia takes drastic measures because of Riz, and Hayley's attempt to support her friend is similarly misguided.

Episode 9: What Goes Around
Alya photographs Cory at a food bank and spreads the image around at school, but karma comes back to bite her when her father confesses his own financial woes. Nasreen gets caught between her sister and her girlfriend when Razia and Sam have an altercation.

Episode 10: The Truth Is…
Naveed is struggling with his comedy routine, and his problems only get worse when his mother finds out that his engagement to Nasreen is fake. When Kaneez won't commit to a relationship with Rashid, he asks Emma to accompany him to his university reunion.

Episode 11: Drastic Measures
Missy wants to have a family with Aaron instead of continuing her studies, but Nasreen suspects that Missy may have taken matters into her own hands. Emma goes to extremes to put an end to Chloe's relationship with an older man.

Episode 12: Exams
As the students take their GCSE exams and prepare for prom, Mandy confronts Javid about the school finances. Not wanting to move back home with his father, Jordan seeks out his mother.