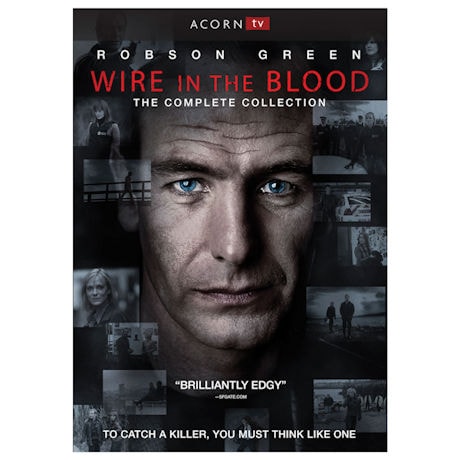 Series 1
• Episode 1: The Mermaids Singing
With a serial killer on the loose, DI Carol Jordan calls in clinical psychologist Dr. Tony Hill for help with the investigation, despite objections from her superiors. When a cop becomes the next victim, the case turns personal.
• Episode 2: Shadows Rising
Tony and Carol reunite when the years-old corpse of a teenage girl is found. Carol is also pulled into investigating hate-mail sent to a popular TV personality couple, Jack and Amanda Vance. After a murder at the Vances' house, Tony becomes convinced that the two cases are connected.
• Episode 3: Justice Painted Blind
Carol investigates the death of a young woman found strangled in the woods with the number "2" attached to her body. The case bears similarities to the previous murder of 11-year-old Trudy Hibbert, but Tony doesn't think they are related.

Series 2
• Episode 1: Still She Cries
While Tony and Carol search for the killer of a young Dutch nurse, the best friend of one of Tony's students goes missing. Meanwhile, Tony gets closer to discovering where his child-killer patient, Maggie, buried her victims.
• Episode 2: The Darkness of Light
The 500-year-old skeleton of a girl is discovered at a new hotel site, but forensics show that the corpse was recently moved. The case becomes even more perplexing when the bodies of a young couple are found buried underneath it.
• Episode 3: Right to Silence
Carol and Tony investigate a brutal murder that bears the hallmarks of another killing that occurred three months earlier, but the man convicted of that crime is behind bars. Did he escape prison to kill again, or was he wrongly accused?
• Episode 4: Sharp Compassion
Tony quickly solves the attempted murder of a mother, but the case becomes more complicated when she dies in the hospital after surgery. Carol feels the pressures of her promotion to DCI, while Tony finds his academic position is at risk.

Series 3
• Episode 1: Redemption
Carol calls in Tony to help investigate the murder of a 10-year-old boy whose body was repositioned after death. As Carol recovers in the hospital after suffering an assault, Tony realizes the killer was targeting runaway children.
• Episode 2: Bad Seed
Carol and Tony examine the brutal slaying of a religious couple in their home that seems to be linked to a local slaughterhouse. As Carol suffers a personal crisis, Tony works with a convicted murderer who claims he's reformed.
• Episode 3: Nothing but the Night
Tony returns home from a disappointing book tour to assist Carol in her investigation of a divorced woman's violent death. When another victim turns up—this time an elderly man—Tony struggles to find a connection.
• Episode 4: Synchronicity
After being hit on the head by a suspect, Tony undergoes a neurological exam and receives a surprising result. Carol tracks a serial killer who shoots his victims from afar and leaves a playing card at the scene.

Series 4
• Episode 1: Time to Murder and Create
When lawyers drag up an old case, Tony contacts Carol only to learn that she's moved out of the country. Carol's replacement, DI Alex Fielding, is investigating the death of a woman stuffed into a barrel but is reluctant to accept Tony's input.
• Episode 2: Torment
When Tony responds to a violent incident at a mental hospital, he believes the inmate was triggered by news of a prostitute's brutal murder. With more victims and no leads, DC Paula McIntyre volunteers to go undercover in a sting operation.
• Episode 3: Hole in the Heart
After talking a suicidal man off a roof, Tony assists Alex in evaluating what appears to be a bizarre double murder. Further deaths suggest that the killers might commit suicide after the crime, and Tony believes a secret society may be involved.
• Episode 4: Wounded Surgeon
Tony gives expert testimony at a parole board hearing, but the police release convicted rapist Jason Eglee against his advice. When a young woman is abducted from a nightclub and murdered, Tony immediately suspects Eglee, despite his rock-solid alibi.

Series 5
• Episode 1: The Colour of Amber
When a young girl is seen being dragged into a car, Alex issues an amber alert, knowing that their chances of finding the girl alive decrease sharply after the first hour. The police learn that a convicted pedophile has recently been released into the area, but Tony instead grows convinced that the girl knew her attacker.
• Episode 2: Nocebo
Alex investigates the murder of a troubled teenager, but when another young victim turns up, mutilated like the teenager, Tony concludes that the killer is performing voodoo-like rituals. Suspects include an edgy artist, a charismatic "healer," and a vicious property developer.
• Episode 3: The Names of Angels
When a young woman is raped and strangled, police find ID and clothing on the body that belonged to another victim who died in Copenhagen five years earlier. Meanwhile, Tony receives alarming visits from a former patient, while Alex's son lashes out.
• Episode 4: Anything You Can Do
An elderly woman is murdered in her home with no obvious motive. Although Alex and Tony quickly identify a suspect, his domineering mother impedes their investigation. Meanwhile, Tony's friend and fellow psychologist visits from America.
• Bonus: Prayer of the Bone
Tony travels to Texas to testify as an expert psychologist in the trial of Darius Grady, a former soldier accused of killing his wife and children. Tony had previously examined Grady in Bradfield when he was found with an underage girl but attributed his crimes to PTSD.

Series 6
• Episode 1: Unnatural Vices
When a woman is found dismembered and stuffed into a suitcase, her father confesses to the murder. But as more victims are discovered, it becomes clear a serial killer is at large. Meanwhile, Tony's neighbor accuses him of harassment, and a cocky young detective joins Alex's team.
• Episode 2: Falls the Shadow
Alex investigates the death of a prostitute killed by blunt-force trauma to the head. Tony reconnects with an old friend at a psychology conference, but when she turns up murdered the next day, he becomes the prime suspect.
• Episode 3: From the Defeated
A man is found beaten, strangled, and shot, but which action caused his death? Meanwhile, Tony is called to reevaluate Michael Bryant, a convicted cannibal Tony helped put away, after the inmate claims to have undergone a religious conversion.
• Episode 4: The Dead Land
Someone is killing homeless men and bathing their bodies in what appears to be a ritualized manner. After Alex is forced to step away from the investigation due to a personal tragedy, Tony works the case with an ambitious new detective while also dealing with the fallout of Michael's escape from the asylum.

"This absorbing, graphic TV series will hold you captive." — SoundandVision.com