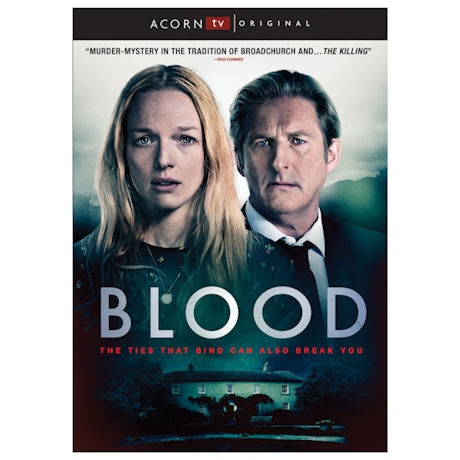 $39.99 $29.99
Share Me:
add to wish list
Overview
BAFTA nominee Adrian Dunbar (Line of Duty) is a respected doctor in a small Irish town. When his wife dies, everyone believes it was an accident—except his daughter (Carolina Main, Unforgotten), who mistrusts her father because of a childhood trauma. What happened that day by the pond? Was it an accident? Or was it murder? 6 episodes, 4 ½ hrs, 2 DVD or Blu-ray discs, SDH. Mature audiences.
Episodes
Episode 1: Coming Home
After the unexpected death of her mother, Mary, Cat Hogan returns to her small hometown from Dublin and notices her father, Jim, acting strangely. Cat tries to tell her siblings, Fiona and Michael, that she suspects their father had a hand in their mother's death.

Episode 2: Secrets and Lies
Cat confides her suspicions about her father to Garda Dez, while Jim presents a promise ring to his girlfriend. Cat visits her childhood friend Barry to have some fun, but she ends up sharing a dark secret from her past.

Episode 3: The Funeral
Tensions run high among the Hogan family on the day of the funeral, exacerbated by the surprise arrival of Jim's sleazy cousin Frank. Cat worries about Barry, who hasn't been returning her calls.

Episode 4: Memories
After the incident with Frank, Jim shields Cat from blame but demands she stop investigating Mary's death. Fearing she's in danger, Cat seeks refuge with Barry, who has been looking into his own family's secrets.

Episode 5: Last Chance
Reeling from yet another tragedy, Cat runs into Dez at Barry's house, and Dez presents her with a difficult decision. As Jim prepares to leave town, Michael and Fiona attempt to clear the air.

Episode 6: The Truth
The truth of Mary's death finally comes out, with lasting consequences for the Hogan family. But will it be the answer Cat wants?