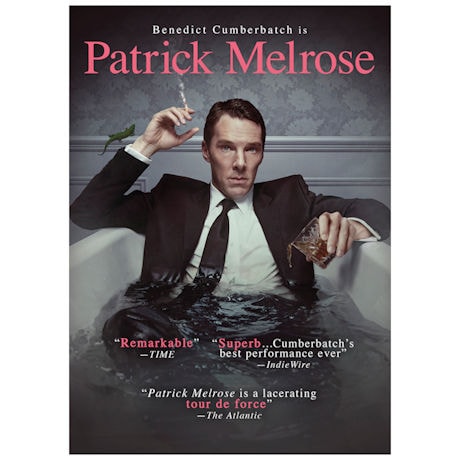 $39.99 $29.99
Share Me:
add to wish list
Overview
Benedict Cumberbatch (Sherlock, The Imitation Game) stars as Patrick Melrose, an aristocratic and outrageously funny playboy, who struggles to overcome a deeply traumatic childhood, adult substance abuse, and the challenges of seeking recovery and redemption. Based on the acclaimed series of novels written by Edward St. Aubyn, each episode is devoted to one of the five novels, as the series gleefully skewers the British upper class. 5 episodes, 5 hrs, 2 DVDs or Blu-ray discs. Mature audiences.
Episodes
Episode. 1: Bad News
1982: While in the grip of an all-consuming heroin addiction, Patrick flies from London to New York to collect his father's ashes. Despite assuring his friends that he will detox during the trip, Patrick indulges in a cocktail of drugs and alcohol in an attempt to suppress his past.

Episode. 2: Never Mind
1967: The Melroses are hosting a dinner party for their friends in their chateau in the south of France. Then eight-year-old Patrick's world is turned upside down after he endures a traumatic event that will cloud his life forever.

Episode. 3: Some Hope
1990: Patrick, now 31, is clean and practicing law. The invitation to a high-society event in the Cotswolds allows him to see this decadent world through sober eyes for the first time, and he comes one step closer to resolving his troubled childhood.

Episode. 4: Mother's Milk
2003: Patrick is now 44 and married to Mary, with two sons. Although he's off the heroin, Patrick is still struggling with substance abuse when his ill mother drops a bombshell, and the Melrose family returns to London to face the future.

Episode. 5: At Last
2005: Patrick's lifelong wish comes true with mixed results, as he tries to put the ghosts of the past to rest.

"The best show on TV you're not watching…riveting" — Forbes