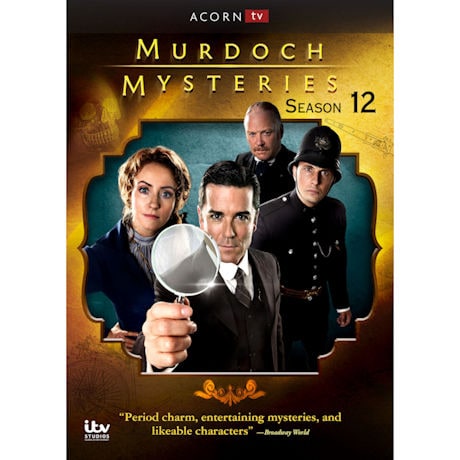 $59.99
5 Reviews Write a Review
Item #: XC8262
In this beloved, award-winning Canadian series, Detective William Murdoch (Yannick Bisson) solves turn-of-the-century intriguing mysteries with the help of Constable Crabtree (Jonny Harris) and Inspector Brackenreid (Thomas Craig). In Season 12, Detective Murdoch and his team tackle cases involving a seemingly invisible man, the political killing of a French diplomat, a possible alien invasion, and one of their own suspected END_OF_DOCUMENT_TOKEN_TO_BE_REPLACED
Add to Wish List

In this beloved, award-winning Canadian series, Detective William Murdoch (Yannick Bisson) solves turn-of-the-century intriguing mysteries with the help of Constable Crabtree (Jonny Harris) and Inspector Brackenreid (Thomas Craig). In Season 12, Detective Murdoch and his team tackle cases involving a seemingly invisible man, the political killing of a French diplomat, a possible alien invasion, and one of their own suspected of murder. Along the way, they encounter the greatest minds of the time, including architect Frank Lloyd Wright, entrepreneur Elizabeth Arden, and inventor Nikola Tesla. 18 episodes, 5 DVDs or 4 Blu-ray discs, SDH. Mature content. We regret we cannot ship Murdoch Mysteries to Canada.

Episode 2: Operation: Murder
In the course of her training to become a surgeon, Julia completes what appears to be a successful operation, but the patient dies shortly afterwards. Refusing to accept that she made a mistake, Julia suspects foul play and asks Murdoch to help her investigate.

Episode 3: My Big Fat Mimico Wedding
When Higgins is shot at on his wedding day, Murdoch and Brackenreid believe the culprit to be one of the guests. In the resulting commotion, Higgins confesses a dark secret that could prevent the wedding altogether.

Episode 4: Murdoch Without Borders
After the man in charge of a new deportation policy is murdered, Murdoch and Brackenreid investigate local Greek immigrants, including an acquaintance of Brackenreid's. Meanwhile, Julia wrestles with an ethical dilemma when a patient is subject to deportation.

Episode 5: The Spy Who Loved Murdoch
When a French diplomat is stabbed to death while under the supervision of Terrence Meyers, Murdoch must go undercover to protect the Triple Entente, an alliance between France, Britain, and Russia that is intended to prevent a world war.

Episode 6: Sir. Sir? Sir!!!
After a meteor shower, strange things start appearing across Toronto: mysterious objects, bottomless craters, and undiscovered species. When several people begin behaving oddly, Crabtree believes it's up to him to defend Earth from an alien invasion.

Episode 7: Brother's Keeper
Murdoch and Crabtree discover a body outside a tavern and find Detective Watts nearby, holding a gun. Watts claims he shot the man in self-defense, but Murdoch grows suspicious when the evidence doesn't back up his story.

Episode 8: Drowning in Money
Crabtree and John respond to a burglary at an extravagant mansion only to find the owners of the house drowned in the bottom of their pool. Crabtree faces legal problems when his mechanic's shop is sued after hiring Higgins.

Episode 9: Secrets and Lies
A woman with whom Brackenreid had an affair more than 20 years ago calls him to St. Marys to help find their missing daughter. As Brackenreid searches for the child he never knew he had, John worries about his father's safety.

Episode 10: Pirates of the Great Lakes
An Italian detective arrives at the station demanding that Murdoch help him track down the lost treasure of Pompeii, but the case grows complex when the suspected thief turns up murdered. Brackenreid considers leaving the force after the fallout with his family.

Episode 11: Annabella Cinderella
When a convicted murderer escapes en route to prison, Crabtree and John race to find her before she can harm the witnesses in her trial. Meanwhile, Murdoch and Julia are outraged to find that the new police handbook does not include any scientific innovations.

Episode 12: Six of the Best
After discovering the body of a young boy in the woods, Murdoch and Watts trace him back to the nearby orphanage from which he ran away. While questioning the staff, Murdoch is surprised to see one of his old teachers, who now runs the boys' home.

Episode 13: Murdoch and the Undetectable Man
Murdoch reunites with Nikola Tesla when a fellow inventor turns up murdered. The victim had been working on a devise to render objects invisible. Meanwhile, Julia enlists Crabtree's help with writing the new police manual.

Episode 14: Sins of the Father
Murdoch responds to the scene of a fire and is shocked to discover the victim is his estranged father, Harry. As Murdoch wrestles with complicated feelings, inconsistencies surrounding Harry's death point to foul play.

Episode 15: One Minute to Murder
Crabtree and Louise Cherry compete in a speed-typing competition, but then one of the other contestants is electrocuted by the typewriter. While Murdoch investigates, Crabtree resents not receiving credit for his work on Murdoch and Julia's police manual.

Episode 16: Manual for Murder
Murdoch and Julia's book reading is interrupted by the discovery of a corpse electroplated in copper. As more bodies turn up murdered in different ways, Murdoch is horrified to realize that the killer is replicating cases from his book.

Episode 17: Darkness Before the Dawn, Part 1
With Murdoch up for a promotion to inspector, Brackenreid puts the damper on Watts's side investigation into an informant's death to avoid ruffling the feathers of police officials. Watts nonetheless pursues a lead, resulting in grave consequences for all involved.

Episode 18: Darkness Before the Dawn, Part 2
With Constable Brackenreid under arrest for Lucille Palmer's murder, Murdoch and Crabtree continue investigating and find evidence that someone is framing John. When Inspector Brackenreid goes to confront their suspect, the case takes an even more dangerous turn.

The Murdoch After Show featurettes for each episode