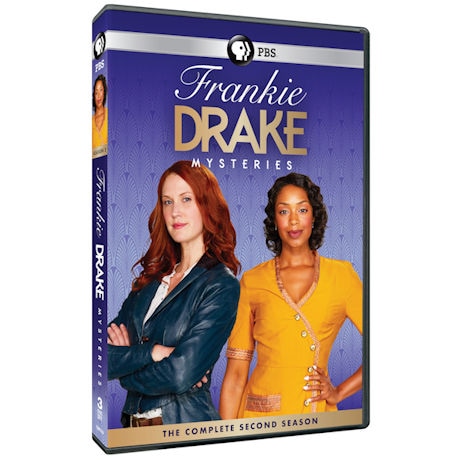 Frankie Drake (Lauren Lee Smith) and her partner Trudy Clarke (Chantel Riley) are the Drake Private Detectives, the only all-female detective agency in 1920s Toronto. Their fearless sense of adventure has them fighting crime in the age of gangsters, rum-runners, and speakeasies. 10 episodes, 6 hrs, 3 DVDs, SDH. PRE-ORDER NOW Ships June 25.
We regret we cannot ship Frankie Drake Season 2 to Canada.


Item can only be shipped to US destinations.

Episode 1: The Old Switcheroo
An old rival turns up selling antiquities, but Frankie's convinced it's all a scam. Can the team prove it before she takes the money and runs?

Episode 2: Last Dance
The team investigates a kidnapping gone wrong at the Palais Royale. They learn the victim is gravely ill and race to find him and save his life.

Episode 3: Radio Daze
Mary is acting in a radio drama, but when she realizes the play is a cover for a heist, she must find a way to warn Frankie.

Episode 4: Emancipation Day
When donations are taken from a colored girls' orphanage, civil rights hero Marcus Garvey hires the team to catch the thief and find the cash.

Episode 5: Dressed to Kill
When famed French designer Coco Chanel is the target of a brazen assassination attempt, Drake Private Detectives are hired to protect her.

Episode 7: Fifty Shades of Greyson
Mary's job is threatened when she accuses Detective Greyson of hiding evidence. Has she overstepped her bounds, or is Greyson a dirty cop?

Episode 8: Diamonds Are a Gal's Best Friend
What starts as a simple case of a missing horse leads the team into the gardens of Toronto's elite in pursuit of a murderous jewel thief.

Episode 10: Now You See Her
When a magician's assistant is killed, Frankie goes undercover to find the culprit. But can she see clearly through the smoke and mirrors?