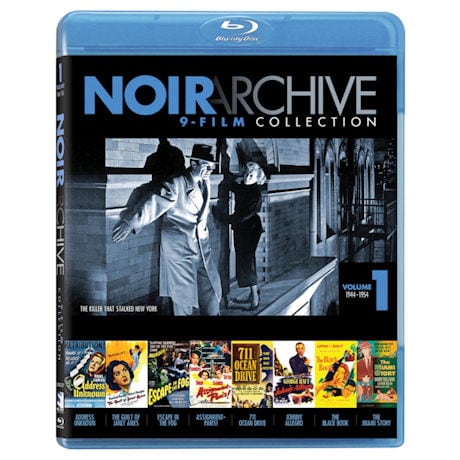 Address Unknown (1944)
In this classic drama, Paul Lukas stars as Martin Schulz, a German-American art dealer who returns to Germany during the early Nazi era and quickly becomes caught up in Hitler's madness. After abandoning his partner's Jewish daughter, she flees for her life. But when Schulz has a run in with the Gestapo he discovers the horrifying error of his ways.

Escape In The Fog (1945)
A San Francisco nurse (Nina Foch) is plagued by recurring nightmares where she witnesses a man fatally assaulted on the Golden Gate Bridge. She takes her problems to a psychologist (William Wright) who's embroiled in efforts for wartime intelligence, and discovers to her shock that he is the victim from her dreams. Look for Shelley Winters as a taxi driver.

The Guilt Of Janet Ames (1947)
The widow (Rosalind Russell) of a soldier who gave his life to save five buddies during World War II is determined to find out if each man was worth saving. But when a slight injury from a minor accident inexplicably paralyzes her, one of the survivors (Melvyn Douglas) realizes her paralysis is purely mental and hypnotizes her in an effort to convince her he and the other four are good men. Also stars Sid Caesar.

Johnny Allegro (1949)
George Raft stars in this action-packed tale of an ex-mobster who agrees to work as an undercover agent for the U.S. Treasury Department. His assignment: travel to a Caribbean island, infiltrate a counterfeiting ring, and stop a plot to destroy America's economy by saturating it with phony currency.

The Black Book (1949)
Director Anthony Mann gives a noirish look to this historical thriller set in 1790s France. Robert Cummings is an ally of the exiled General Lafayette seeking a book of names that can end the bloody regime of Robespierre.

711 Ocean Drive (1950)
In this noirish crime tale, a Los Angeles telephone repairman helps a bookie set up a gambling ring. After the bookie dies, the technician takes over the operation and soon runs afoul of some mobsters from the East Coast who want a piece of his very lucrative business.

The Killer That Stalked New York (1950)
Torch singer Sheila Bennet (Evelyn Keyes) disembarks in Manhattan, having come from Cuba with $50,000 in hot diamonds at the behest of smuggler husband Matt Krane (Charles Korvin). Unbeknownst to her, Sheila's also carrying smallpox, and she becomes the object of a second-and far more high-stakes-hunt by the authorities.

Assignment: Paris (1952)
In this vintage thriller, Dana Andrews shines as Jimmy Race, a reporter assigned to the Paris office of the New York Herald Tribune. After encountering a beautiful French journalist, Race learns of a plot by the Hungarian government to overthrow the communist dictatorship. Travelling to Budapest to get some answers, Race begins covering the most dangerous story of his career.

The Miami Story (1954)
With neither the local authorities nor the feds able to get the goods on vicious vice lord Tony Brill (Luther Adler), a Miami citizens' commission decides that it does take a thief, and recruits ex-con Mick Flagg (Barry Sullivan) to front as a rival. Co-stars Beverly Garland.