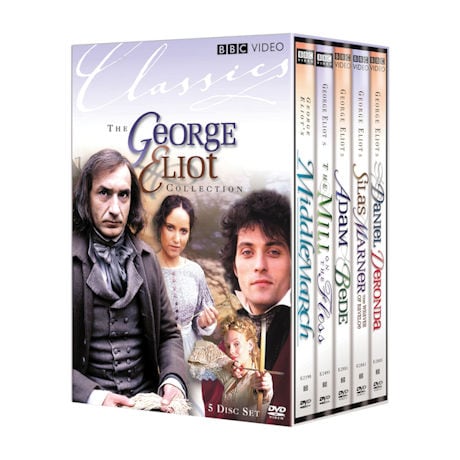 MiddleMarch19th century Great Britain. In the provincial town of Middlemarch, the progressive Dorothea Brooke (Juliet Aubrey) desperately seeks intellectual fulfillment in a male-dominated society and is driven into an unhappy marriage to the elderly scholar Casaubon. No sooner do they embark on their honeymoon than she meets and develops an instant connection with Casaubon's young cousin, Will Ladislaw.

Daniel Deronda is a sensitive, intelligent young man, the illegitimate son of an aristocrat, haunted by the secrets that shroud his birth. Beautiful, vivacious Gwendolen Harleth (Romola Garai) is a gambler and short on cash. When they meet at the roulette table, sparks fly. But Gwendolen needs money more than passion. Daniel (Hugh Dancy) is forced to look at his own mysterious past and find out who he really is…and who he wants to be.

Silas Marner, a member of a strict religious community, is wrongly accused of theft and has no choice but to move to a faraway village. For 15 years he lives alone, and gaining a reputation as a recluse, a miser, and perhaps even a witch. Marner's life changes dramatically one Christmas season, when a mysterious woman dies in the woods outside his cottage leaving behind a child that Marner,takes into his home to raise as his daughter. But Marner's happiness may be threatened, because someone decides he wants to claim his daughter as his own.

The Mill on the Floss Set in 19th century Lincolnshire, the story centers on Maggie Tulliver (Georgia Slowe) who defies her embittered brother - an uptight, ambitious young man by standing by the man she loves. Drama, romance, tragedy and humor all have a place in this most popular of George Eliot's novels.