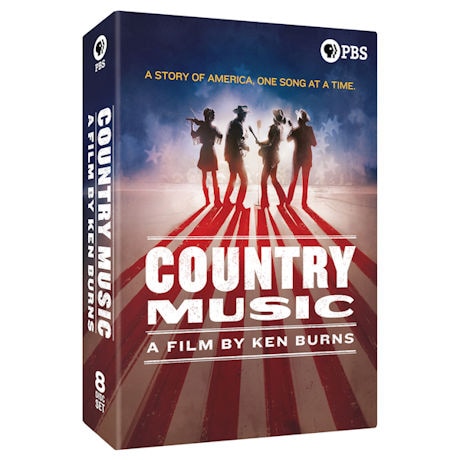 Starting at $99.99
Share Me:
add to wish list
Overview
From its roots in ballads, blues, and hymns performed in small settings, to its current status as the very heart of popular culture, country music is a uniquely American art form. Emmy-award winning documentarian Ken Burns explores its colorful history with never-before-seen footage and photographs, plus interviews with more than 80 artists. 8 episodes, 16 hrs, 8 DVDs or Blu-ray discs. Item can only be shipped within the Continental US.
Episodes
Episode One - The Rub (Beginnings - 1933)
After centuries of percolating in America's immigrant and racial mix, particularly in the American South, what was first called "hillbilly music" begins reaching more people through the new technologies of phonographs and radio.

Episode Three - The Hillbilly Shakespeare (1945 - 1953)
Country music adapts to the cultural changes of post-war society. Bill Monroe and Earl Scruggs transform string band music into Bluegrass. Out of the bars comes a new sound and songs about drinking, cheating, and heartbreak: Honky Tonk.

Episode Four - I Can'T Stop Loving You (1953 - 1963)
In Memphis, the confluence of blues and hillbilly music at Sun Studios gives birth to "rockabilly," the precursor of rock and roll. Elvis Presley and Johnny Cash are at the forefront. Nashville has become Music City USA.

Episode Five - The Sons And Daughters Of America (1964 - 1968)
During a time of upheaval, country music reflects the changes in American society. Loretta Lynn performs songs that speak on behalf of women. Charley Pride becomes a country star. Merle Haggard becomes the "Poet of the Common Man."

Episode Six - Will The Circle Be Unbroken? (1968 - 1972)
With the Vietnam War intensifying, America is more divided than ever. Country music is not immune to the divisions. Kris Kristofferson abandons his military career, becomes a writer whose lyricism sets a new standard for country songs.

Episode Seven - Are You Sure Hank Done It This Way? (1973 - 1983)
Defining country music is debated as never before, and the argument sparks a vibrant era. Dolly Parton crosses over to mainstream success. Willie Nelson finds creative freedom in Texas. Emmylou Harris influences a new generation of artists.

Episode Eight - Don't Get Above Your Raisin' (1984 - 1996)
As country music's popularity skyrockets, the genre confronts the question of whether it can also stay true to its roots. The success of the "New Traditionalists"—Garth Brooks, Reba McEntire, Randy Travis, the Judds, and Dwight Yoakam—suggests it can.


Extras
• Over 4 Hours of Additional Content Included!
• Over 30 Bonus Videos
• The Making of Country Music
• Behind-the-Scenes