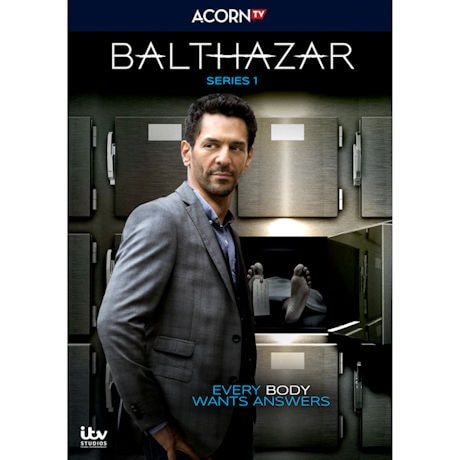 Forensic pathologist Raphael Balthazar (Tomer Sisley) is charming, handsome, intelligent—and haunted by his wife's death. His defiance of conventional procedures presents a major challenge for new police commander Helene Bach (Helene de Fougerolles), as they collaborate to solve Paris's most disturbing crimes. 6 episodes, 5 hrs, 2 DVDs, SDH. Mature audiences. French with English subtitles.We are unable to ship Balthazar to Canada. Item can only be shipped within the Continental US.

When called to a crime scene, unconventional forensic pathologist Raphaël Balthazar immediately clashes with the new, no-nonsense chief inspector, Héèlne Bach. But they must work together to solve the double homicide of a public prosecutor and his wife, who were gunned down in their home, leaving behind their traumatized young daughter.

Reeling from the realization that the person who murdered his wife, Lise, could still be at large, Balthazar arrives to a gruesome scene: a beaten man with his face torn off. Everyone the police interview claims the victim was well-liked, so why was he dumped miles from his home, and why didn't he ever mention his years-old injuries to his wife?

Bach calls on Balthazar to examine a young woman found dead in a truck, but the deceased's body is completely frozen. The police have few leads to go on until Balthazar finds a piece of evidence that connects her to a seemingly unrelated case.

While at the movie theater, Balthazar is called to help a woman who appears to have been stabbed, but after realizing the blood she's covered in belongs to someone else, he races to find the other injured person. Learning that the two victims were engaged, Bach interviews their families, who claim the pair were very much in love, but evidence shows the woman was deeply depressed.

Balthazar examines a dismembered corpse found in the river, but when the body parts don't match up, he realizes there's another victim. As Bach investigates the crime, Balthazar debates whether to tell her that Lise's killer may have committed six other murders.

Balthazar arrives on the scene of a horrific car accident and finds the body of a woman a few yards away. The police assume she was killed in the crash, but Balthazar determines she died several hours earlier, and her corpse was in one of the car trunks.