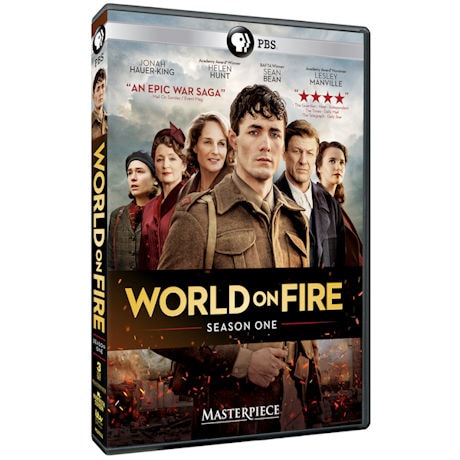 $39.99
2 Reviews Write a Review
Item #: XD5712
From the beaches of Dunkirk to pivotal locations in France, Germany and Poland, this emotionally gripping drama chronicles the outbreak of WWII and its impact on ordinary lives. Working as a translator at the British Embassy in Warsaw, Harry (Jonah Hauer-King, Little Women) falls in love with Polish waitress Kasia (Zofia Wichłacz). When German tanks roll into Poland, Harry and END_OF_DOCUMENT_TOKEN_TO_BE_REPLACED
Add to Wish List

Episode One
When war breaks, young translator Harry vows to help his Polish lover Kasia flee Warsaw, but how will he explain this to his sweetheart Lois, waiting for him at home in Manchester?

Episode Two
A month into war, and with Warsaw destroyed, Harry is desperate for news, while Kasia joins the Polish resistance.

Episode Three
Tom faces the fight of his life aboard HMS Exeter, while Harry and Lois have a more personal battle to fight.

Episode Five
Harry and his unit reach Dunkirk, with the odds stacked against them.

Episode Six
Paris falls to the Nazis, and Webster and Albert's lives are turned upside down.

Episode Seven
Harry has a second chance at saving Kasia from Warsaw. In Manchester, could Lois be set for happiness at last?