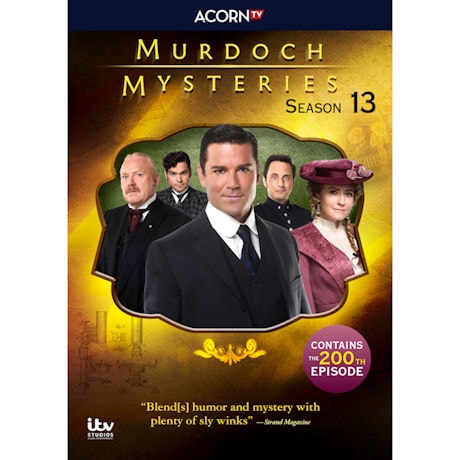 In this beloved, award-winning Canadian series, Detective William Murdoch (Yannick Bisson) a methodical and dashing detective who pioneers innovative forensic techniques to solve some of the city's most gruesome murders with the help of Constable Crabtree (Jonny Harris) and Inspector Brackenreid (Thomas Craig). 5 DVDs or 4 Blu-ray discs, SDH. Mature content. We regret we cannot ship Murdoch Mysteries to Canada.

Episode 1: Troublemakers
When a bomb at a women's suffrage rally kills a man backstage, Murdoch believes the victim was carrying the explosive device and that it went off prematurely.

Episode 2: Bad Pennies
Crabtree makes an arrest in the murder of a dockworker, but the suspect claims he was chasing the real perpetrator. Murdoch investigates unrest at the wharf.

Episode 3: Forever Young
When a woman's body is found in the river, one of Murdoch's inventions identifies her as a missing person from 12 years ago, but she doesn't appear to have aged a day.

Episode 4: Prodigal Father
A waiter dies at an investment presentation for Toronto's waterfront. When Crabtree learns he shares a name with the host, the pair determine they may be father and son.

Episode 5: The Philately Fatality
When Crabtree and Parker break up a party for gay men, the owner of the house is found murdered. Is the killer a jilted lover or a jealous fellow stamp collector?

Episode 6: Murdoch and the Cursed Caves
A couples' camping trip on Halloween takes a turn for the worse when two fellow campers are found dead, seemingly killed by a giant beast.

Episode 7: Toronto the Bad
While moonlighting as a cabdriver, Higgins finds a dead body in the backseat. Murdoch and Brackenreid visit a billiard hall where the victim was a known swindler.

Episode 8: The Final Curtain
The gang attends attend a play starring John Brackenreid, but when an actress is shot onstage, the theatre becomes a crime scene, and all the actors become suspects.

Episode 9: The Killing Dose
When a young woman is rushed to the hospital after falling from a balcony, Julia must make a tough decision. Murdoch investigates whether or not the victim was pushed.

Episode 10: Parker in the Rye
Crabtree and Parker respond to a disturbance call at a whiskey baron's home, only to find three dead bodies and a young man who says he doesn't remember what happened.

Episode 11: Staring Blindly into the Future
In the 200th episode, Murdoch must investigate his fellow innovators when Nikola Tesla disappears after a spat with Thomas Edison at a symposium on the future.

Episode 12: Fox Hunt
Brackenreid attends a traditional English hunt with a friend, but when the dogs find a dead body instead of a fox, Murdoch looks into a group of animal rights activists.

Episode 13: Kill Thy Neighbor
Suspicions falls on Murdoch when his neighbor turns up dead, and evidence at the scene points to Murdoch. The team at Station House No. 4 races to prove he was set up.

Episode 14: Rigid Silence
Murdoch and Julia learn about a suspicious prison death from a familiar face. Brackenreid deals with a strike at the telephone office that pits him against his daughter.

Episode 15: The Trial of Terrence Meyers
When Terrence Meyers is charged with the attempted assassination of the prime minister, Murdoch, Julia, and Brackenreid are called to give evidence at a tribunal.

Episode 16: In the Company of Women
Julia visits a hair salon only to find the owner dead on the floor. The detective on the case rules her death an accident, but Julia, Effie, and Louise suspect foul play.

Episode 17: Things Left Behind
After Watts stumbles upon a body in an alley, Murdoch takes over the case and Watts is reassigned to investigate the robbery of an expensive painting.

Episode 18: The Future Is Unwritten
Julia returns to Toronto to help Murdoch prove Violet is guilty of murder, but with Effie representing Violet as her lawyer, the case against her is difficult to build.