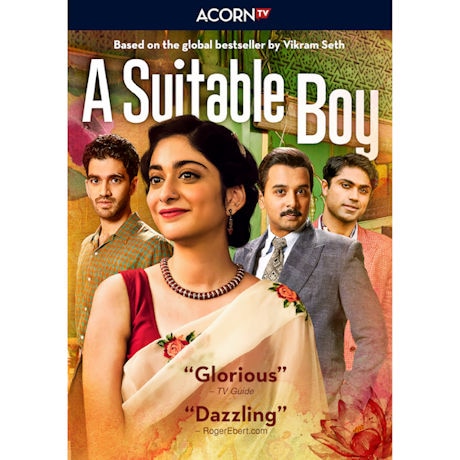 $39.00 $34.99
5 Reviews Write a Review
Item #: XE1312
Set against the cultural and political upheaval of 1950's India, spirited literature student Lata (Tanya Maniktala) is torn between responsibility and romance as her mother eagerly searches for suitors for Lata's arranged marriage. Based on the global bestseller by Vikram Seth. 6 episodes, 5 hrs, 2 DVDs.
Add to Wish List

Set against the cultural and political upheaval of 1950's India, spirited literature student Lata (Tanya Maniktala) is torn between responsibility and romance as her mother eagerly searches for suitors for Lata's arranged marriage. Based on the global bestseller by Vikram Seth. 6 episodes, 5 hrs, 2 DVDs.

Episode 1:
In newly independent India, passionate literature student Lata Mehra is looking towards the future. Her mother, Rupa, has successfully arranged the marriage of her eldest daughter and hopes that Lata will be next, but Lata wants to make her own way in the world. Her resolve is challenged when she starts to fall for Kabir, an enigmatic fellow student.

Episode 2:
Lata wants to pursue a romantic relationship with Kabir, though she knows her mother would disapprove of the match. Heartbroken, Lata attends a party in Calcutta with the sophisticated Chatterji family. Meanwhile, glamourous singer Saeeda continues her affair with her much younger lover, Maan, sparking gossip that threatens them both.

Episode 3:
Concerned by Lata's growing friendship with poet Amit Chatterji, Rupa enlists the help of a friend to find her headstrong daughter a husband, and she sees enthusiastic shoemaker Haresh Khanna as the best candidate. Banished to the countryside with his Urdu tutor, Maan becomes involved with rural politics but remains fixated on Saeeda.

Episode 4:
While Haresh is preoccupied with finding himself a superior job, competition for Lata's hand grows when Kabir reenters her life. Maan returns to Brahmpur, but his long-awaited reunion with Saeeda is cut short.

Episode 5:
As the general election approaches, Maan helps his father campaign. While Kabir remains desperate to make amends, Lata finds herself courted by Amit and Haresh in Calcutta. Romantic gestures from both suitors over the Christmas holidays compound Lata's confusion about her feelings for all her admirers.

Episode 6:
Maan turns himself in, but his disgrace has a disastrous effect on his father's political campaign and the entire Kapoor family. Emboldened by casting her vote in India's first national democratic election, Lata makes a decision about her future.

"The production values are high, the performances poised and the locations stunning" — The Guardian