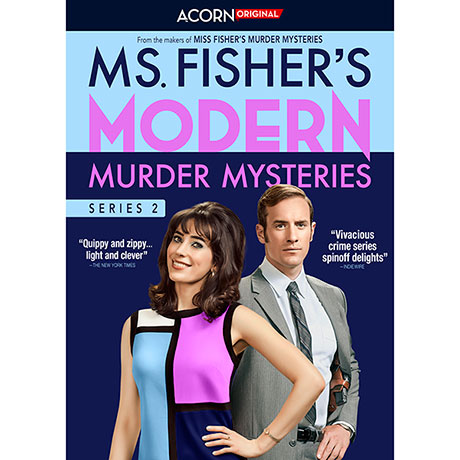 $49.99
8 Reviews Write a Review
Item #: XE5252
Phryne Fisher's long-lost niece, Peregrine (Geraldine Hakewill), returns to solving crimes while looking fabulous. As murders continue to plague the streets of 1964 Melbourne, Peregrine tackles her trickiest assignment yet; juggling her career, the life of an adventuress, and her romance with Detective James Steed. 8 episodes, 6 hrs, 2 DVD or Blu-ray discs.
Add to Wish List

Phryne Fisher's long-lost niece, Peregrine (Geraldine Hakewill), returns to solving crimes while looking fabulous. As murders continue to plague the streets of 1964 Melbourne, Peregrine tackles her trickiest assignment yet; juggling her career, the life of an adventuress, and her romance with Detective James Steed. 8 episodes, 6 hrs, 2 DVD or Blu-ray discs.

Behind the Scenes Featurette 15min