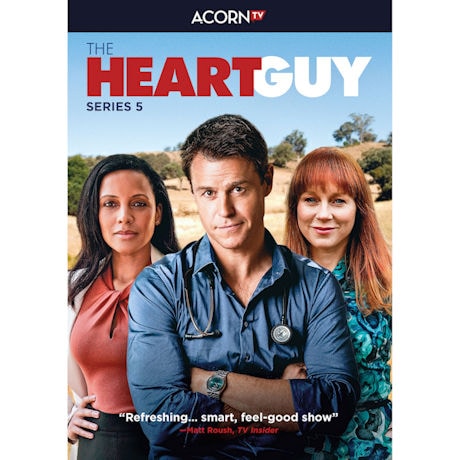 $59.99
2 Reviews Write a Review
Item #: XE5982
Hugh Knight (Rodger Corser) is a talented but arrogant heart surgeon banished from Sydney to his rural hometown of Whyhope to work as a GP. Hugh's plan to leave Whyhope is thrown into chaos when the hospital is forced to shut, Meryl is investigated for corruption, and an old flame makes a surprise return. 8 episodes, 8 hrs, 3 DVD.
Add to Wish List

Hugh Knight (Rodger Corser) is a talented but arrogant heart surgeon banished from Sydney to his rural hometown of Whyhope to work as a GP. Hugh's plan to leave Whyhope is thrown into chaos when the hospital is forced to shut, Meryl is investigated for corruption, and an old flame makes a surprise return. 8 episodes, 8 hrs, 3 DVD.

Episode 1: All Creatures Great and Small
When the discovery of asbestos forces the closure of the hospital and a move to a smaller veterinary clinic, Hugh decides it may be time to leave Whyhope. But the arrival of Sharna Bahtt, the new council administrator, changes everything for Hugh and the Knight family.

Episode 2: The Unbearable Lightness of Being in Whyhope
While Penny looks to “find herself” at a rival hospital, Hugh puts his all into bringing the new clinic up to speed. Meanwhile, Sharna inspires Matt to take Whyhope beers to the world, and Ajax gets an extra set of hands to help around the farm: Tom.

Episode 3: Calamity Jane
Charlie organizes a fundraiser after her friend Kassie’s funeral, and Penny rejoins the clinic as a locum, with Hugh still very much in charge. Hugh is drawn to Sharna, while Hayley feels a similar pull to Tom.

Episode 4: The Things We Do for Love
Sacked from the council by Sharna on the grounds of her corruption, Meryl is saved by the arrival of Michael, a lawyer and old flame—but not exactly a white knight.

Episode 5: Bridge over Troubled Water
Michael digs up some dirt on Sharna, looking to discredit her evidence in court, but lines of loyalty are tested as Hugh finds himself falling deeper for his mother’s accuser and Hayley tells Ajax something that will shatter his world.

Episode 6: Reasonable Doubt
Meryl is found guilty in court, and Ajax turns to gambling as a distraction from his marital problems, but it’s not all bad news: the clinic hits the KPI quotas necessary to secure their funding, despite a sabotage attempt by Penny, who knows that if they are successful, Hugh is likely to leave.

Episode: A Ghost in the Heart
Hugh is free to leave Whyhope, so Sharna takes him to Sydney to show him the city life he thought was lost. Matt tags along to pitch his beer and gets an offer, while back in Whyhope, Charlie takes up Sharna’s offer to become the new temporary mayor.

EP 8: The Taste of Whyhope
Love comes to Whyhope: Meryl and Michael find a way through their past, Hayley and Ajax start afresh under the stars, Charlie and Matt get hitched again, and Hugh leaves with Sharna to start a new life in Sydney. But there’s just one thing that Sydney doesn’t have: Penny.

“A marvelous mix of family dramedy and medical procedural” –TVshowpatrol.com