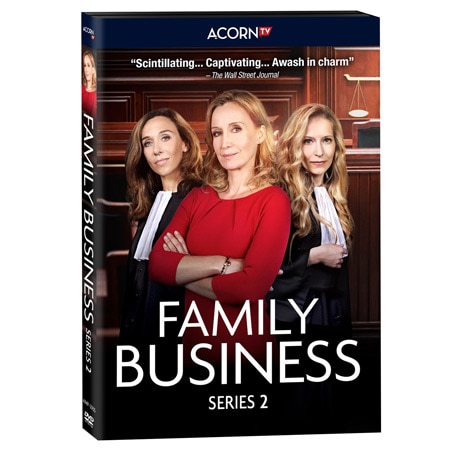 Mother and daughter Astrid (Catherine Marchal) and Audrey (Ophélia Kolb) are lawyers specializing in family law who take the perilous decision to work together. As they argue custody battles, divorce proceedings, and murder charges, every case presents a new challenge. “Scintillating… and awash in charm” — The Wall Street Journal. 8 episodes, 6 ½ hrs, 2 DVDs. French with English subtitles.

Episode 1: Tom
When 15-year-old Tom and his younger sister are brought to the police after spending a night on the street, they ask to sue their parents for neglect. Twenty-first century divorce, or a case of irresponsible parents? Either way things are not so simple for a very pregnant Audrey Lartigues, who—between a jealous husband and a persistent prosecutor—is facing a big decision.

Episode 3: Nathalie
Nathalie causes a stir when she announces to her ex-husband and adult children that she is getting remarried… to Reem, a Syrian doctor and mother of two. Will Astrid find a way to defuse the major conflicts that it creates?

Episode 4: Federico
Federico’s life is turned upside down when a woman he spent a single night with six years ago files a paternity suit against him. Sofia takes up his cause… much to the consternation of Astrid, who has another surprise in store when Rotivel makes their relationship public. Back at work, Audrey is having a hard time readjusting, while Paul shows little affection for their newborn at home.

Episode 5: Antoine
After Diane returns from a trip abroad with her autistic son, she is remanded into custody, accused by her ex-husband of taking their son out of the country without permission. As the parents fight, Astrid does everything in her power to protect the boy. Horrified to discover that Paul knows about her relationship with Eric Leroy, Audrey arranges for a DNA test to prove that Nathan is his son.

Episode 6: Emma
For the past three months, Emma and her father have been living in a van. To keep her father from losing shared custody of her, Emma has been lying to her mother, her friends, even Sofia—which makes it difficult for Sofia to come up with a convincing argument against the mother’s demand for sole custody. Meanwhile, Audrey has to deal with Paul’s vengeance and Leroy’s refusal to accept defeat.

Episode 7: Marianne
Astrid’s doctor, Marianne, has been battling her husband’s stubborn refusal to grant her a divorce. The situation grows more perplexing when suddenly Marianne asks Astrid to stop the proceedings. Astrid tries to make Marianne see that she is a controlled woman. Having finally found a way to pressure her husband to accept shared custody of their daughter, Sofia asks Kechiouche to negotiate for her.

Episode 8: Audrey
Accused of murdering her husband, Marianne refuses to put up a defense, to the distress of Astrid and criminal lawyer Rotivel, who are working together for the first time. When Sofia’s ex is arrested for fraud, she obtains custody of her daughter and has to rely on Kechiouche to get into the girl’s good graces. Fed up with Paul’s cold hostility, Audrey is ready to make an irreversible decision.

"A whippy meringue of a French drama … Warm, light and funny." – Radio Times