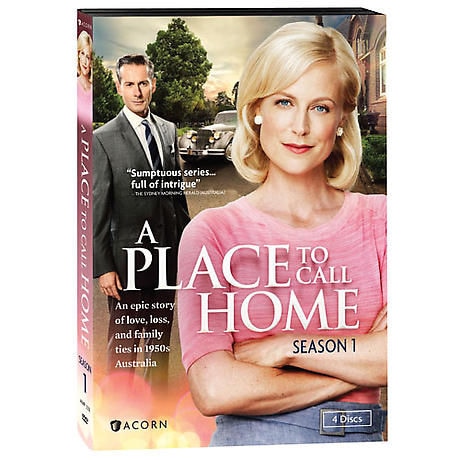 $59.99 $49.99
Share Me:
add to wish list
Overview
It's 1953, and the horrors of WWII are still fresh in many memories. After 20 years abroad, nurse Sarah Adams (Marta Dusseldorp, Jack Irish) decides to return to Australia. Working her passage home aboard an ocean liner, she becomes entangled in the lives of the Blighs, a wealthy rural Australian family with a dark secret. This compelling story of love, loss, and lies was the most popular Australian drama of 2013. 13 episodes, 10 hrs, 4 DVDs, SDH.


Episodes
Disc 1
Episode 1: The Prodigal Daughter
After 20 years in Europe, nurse Sarah Adams is returning to Australia to see her grieving mother. When her hopes for reconciliation go awry, Sarah contacts George Bligh, whose mother she had nursed on the transoceanic trip, for employment. His mother, however, has other ideas.

Episode 2: The Welcome Mat
Sarah takes up new lodgings at a boarding house, but the nosey landlady may make her regret the decision. A riding accident devastates Anna and brings back painful memories for Sarah. Meanwhile, Olivia receives welcome news.

Episode 3: Truth Will Out
Sarah arrives at her first day on the job only to face questions from Dr. Jack Duncan about her real name. Deeply offended by the invasion of her privacy, Sarah resolves to leave Inverness-but not before revealing the truth about what happened on the ship.

Episode 4: The Mona Lisa Smile
Jack gets a horrible shock while accompanying Sarah on her daily rounds. Olivia's curiosity about her husband's former lover grows, and Sarah begins to open up about her past after spending time with a local Jewish family.

Disc 2
Episode 5: Day of Atonement
With Yom Kippur approaching, Sarah takes the opportunity to make amends with people. Her spiritual cleansing, however, resurrects difficult emotions about her husband's death. Meanwhile, Anna rebels when the Swansons come to visit with their eligible son, Andrew.

Episode 6: That's Amore
Anna and Gino's romance grows deeper at the same time as James and Olivia's marriage reaches a breaking point. Sarah lands herself in the middle of a dangerous domestic dispute involving one of her patients.

Episode 7: Boom
After learning that her mother is dying, Sarah hastens to Sydney to be at her bedside. George and Anna also head to the city to visit his sister, Carolyn, from whom Anna secretly wants help obtaining birth control. Back at Ash Park, Mrs. Bligh takes James and Olivia into her confidence.

Disc 3
Episode 8: Worlds Apart
Mrs. Bligh's heart attack upends the household-but also gives everyone some unaccustomed freedom while she's recovering in the hospital. Anna and Gino's plans to tell their families about their engagement hit a roadblock, but George and Sarah start to move forward with their relationship.

Episode 9: Cane Toad
Mrs. Bligh summons George's sister-in-law, Regina, to help keep an eye on happenings at Ash Park-and to interfere with George and Sarah's budding romance. James and Olivia both come to terms with their respective foes.

Episode 10: Lest We Forget
George organizes a reception for visiting Japanese businessmen, awakening Jack's anger over atrocities he experienced in the war. Anna anxiously awaits her test results, and Sarah deals with Regina's hostility towards her.

Disc 4
Episode 11: True to Your Heart
Mrs. Bligh returns home to Ash Park, but not everyone is happy about it. Olivia pleads with James for a change of scenery, Regina connives to extend her visit, and George receives an ultimatum. Meanwhile, Anna faces a life-altering decision.

Episode 12: New Beginning
George's proposal may have serious consequences for his future. Anna prepares to face her own consequences for her decision, but fate intervenes. James and Olivia head off to Sydney, and Sarah finally comes to dinner at Ash Park.