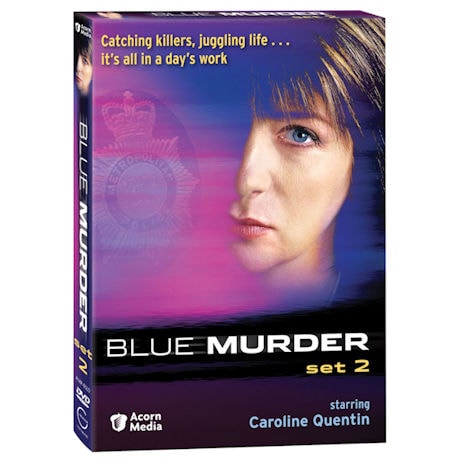 $39.99 $31.99
Share Me:
add to wish list
Overview
On the job, Janine Lewis deals with drive-by executions, decomposed bodies, and abducted children. At home, she interviews nannies, schedules parent-teacher conferences, and bolts breakfast on the run. Such is the life of a Detective Chief Inspector on the Manchester police force who also happens to be a single mum raising four kids. Caroline Quentin (Jonathan Creek, Men Behaving Badly) brings sensitivity, passion, and wry humor to her role as a woman balancing the demands of a high-risk, high-profile profession with the need to nurture her high-maintenance family. Ian Kelsey (Casualty) co-stars as DI Richard Mayne, Janine's sexy second in command--a source of romantic and sometimes professional tension on their tight-knit team. In four taut, all-new crime dramas, Blue Murder realistically depicts the everyday toils and triumphs of police work alongside the insistent tug of family life for a single mother. 4 episodes, approx. 275 min. on 2 DVDs.
Episodes
Disc 1
Episode 1: The Spartacus Thing
After serving only 18 months in prison for strangling his wife with a dog chain, Alan Hickson meets a strikingly similar end. Still outraged over Hickson's light sentence, 15 members of his dead wife's family confess to his murder. Thus, Janine and Richard face the daunting task of proving a roomful of suspects innocent.

Episode 2: Make Believe
When three-year-old Sammy Wray apparently vanishes into thin air from a neighborhood playground, the squad moves heaven and earth to find him. But when a child's body turns up wrapped in a sheet in a drainage tunnel, the mystery only deepens and leads Janine to families shattered by jealousy and delusion.

Disc 2
Episode 3: In Deep
At the bottom of Blackshore Lake, divers find the remains of a man eventually identified as Mickey Day, a small-time crook and drug dealer. What connection--if any--did he have with a group of four college mates who used to fish together at the lake but now are dying under suspicious circumstances, one by one?

Episode 4: Steady Eddie
Eddie Carter was a copper's cop, a bloke who preferred walking the beat to climbing the greased pole of promotions within the police department. When he dies in a drive-by shooting, though, Janine and her team turn up some surprising and devastating details that dovetail with their investigation of a jewel heist gone wrong.
Details
Packaging: Boxed Set
Run Time: 275 minutes
Format: Widescreen
Number of discs: 2
Language: English
Subtitles: N/A
Color or B&W: Color
CC: Yes
SDH: No
Region Code: 1
Aspect Ratio: 16:9
Rating: N/A
Press
"The best British mystery you haven't seen."--San Francisco Chronicle

"Caroline Quentin, best known for her comedic turns in Men Behaving Badly and Whose Line is it Anyway?, plays Janine with strength, sensitivity and humor."--Crimespree Cinema

"Watch just one episode of this dandy British detective series and you'll be addicted the the characters, the intelligent writing and the cool Manchester accents."--Crimespree Cinema
Awards