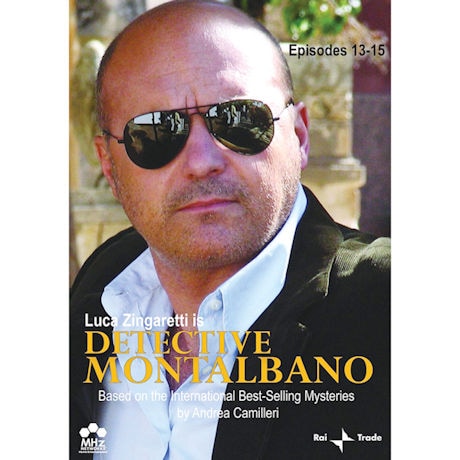 $39.99
Buy 2 or More Episode Sets, Save 10%
Share Me:
add to wish list
Overview
Based on the spectacularly successful Inspector Montalbano mysteries by Andrea Camilleri, this long-running Italian television series is a huge hit in Europe. Luca Zingaretti stars as the grouchy Sicilian police chief who hates bureaucracy and loves Sicily, justice, his girlfriend, Livia, and Sicilian cooking. Filmed in sun-washed Sicily. Includes "The Paper Moon," The Spider's Patience" and "Find the Lady". 5 hrs, 3 DVDs. Italian with English subtitles.
Episodes
EPISODE 13: SPIDER'S PATIENCE
A young girl is kidnapped, but her once-prominent family has fallen on hard times. Who will pay the ransom? Her heartbroken fiancé steps up to help the investigation, but as Montalbano digs deeper he wonders how the family ended up broke and if the girl is really in danger at all.

EPISODE 14: FIND THE LADY
The apparent murder of a local construction magnate gets Montalbano thinking about the decades-old murder of his one-time top competitor. Although a man went to prison for that crime, was justice served? Montalbano finds that the key to one crime may lie in rethinking the other.

EPISODE 15: PAPER MOON
A well-to-do womanizer is killed in what appears to be a crime of passion. At the same time, a number of politicians drop dead under mysterious circumstances. To solve it all, Montalbano faces the toughest challenge of his career…understanding the female psyche.