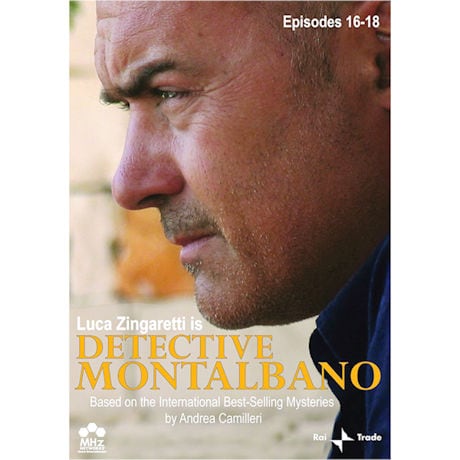 $39.99
Buy 2 or More Episode Sets, Save 10%
Share Me:
add to wish list
Overview
Based on the spectacularly successful Inspector Montalbano mysteries by Andrea Camilleri, this long-running Italian television series is a huge hit in Europe. Luca Zingaretti stars as the grouchy Sicilian police chief who hates bureaucracy and loves Sicily, justice, his girlfriend, Livia, and Sicilian cooking. Filmed in sun-washed Sicily. Includes "Track of Sand", "The Wings of the Sphynx" and August Flame." 5 hrs, 3 DVDs. Italian with English subtitles.
Episodes
EPISODE 16: TRACK OF SAND
After a badly injured horse dies on the beach outside his house, Montalbano's investigation brings him into a world of elegant races, beautiful horsewomen, and a secret Mafia-run underground betting ring. And what would Livia say if she saw him dining al fresco with a new friend?

EPISODE 17: WINGS OF THE SPHINX
Montalbano investigates a local church organization in connection with the murder of a young eastern European immigrant. He's also trying to work things out with Livia, but has better luck unraveling the mystery of the butterfly tattoo on the shoulder of the unfortunate victim.

EPISODE 18: AUGUST HEAT
The August heat of Vigata is driving everyone mad, but is that any excuse for Montalbano losing his personal and professional bearings during a murder investigation? He gets help from the beautiful twin of the victim, but unwittingly falls prey to her lust for vengeance.