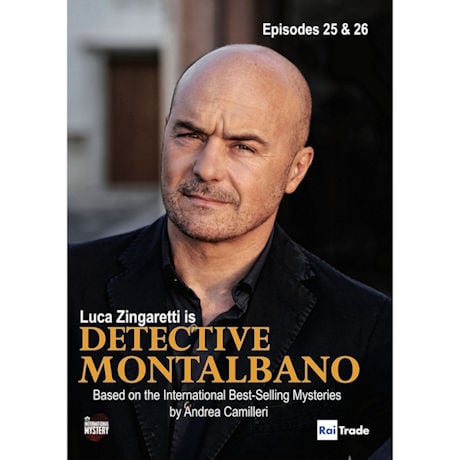 $29.99
Buy 2 or More Episode Sets, Save 10%
Share Me:
add to wish list
Overview
Based on the spectacularly successful Inspector Montalbano mysteries by Andrea Camilleri, this long-running Italian television series is a huge hit in Europe. Luca Zingaretti stars as the grouchy Sicilian police chief who hates bureaucracy and loves Sicily, justice, his girlfriend, Livia, and Sicilian cooking. Filmed in sun-washed Sicily. Includes "A Voice in the Night", "A Ray of Light". 3 1/2 hrs, 2 DVDs. Italian with English subtitles.
Episodes
EPISODE 25: A VOICE IN THE NIGHT
When a theft occurs at a supermarket controlled by a powerful Mafia family, Detective Montalbano finds himself having to trap the guilty using unconventional methods. He knows the Mafia inspires fear, especially when it's allied with politics. So to catch the perpetrator he does something he's never done before. His rationale: when one's adversaries aren't following the rules, you're authorized to break them yourself. In the end what counts is just solving the case. Which works, at least until the next homicide.

EPISODE 26: A RAY OF LIGHT
Mimi has no problem obliging when Montalbano asks him to be an undercover lothario in the investigation of a female assault victim's alibi. Montalbano's got bigger stuff going on: a farmer has reported trespassing in an abandoned shed and there's evidence to support the presence of an arms trafficking ring. And as if the week isn't busy enough, Livia asks to come visit when she gets hit with an unshakeable sense of depression. Not until the end of her stay do they figure out just what was giving her a heavy heart.