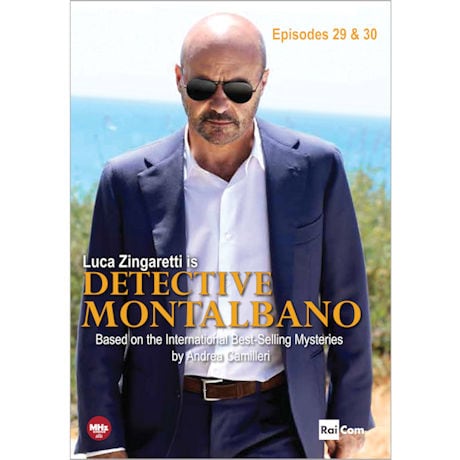 $39.99
Buy 2 or More Episode Sets, Save 10%
Share Me:
add to wish list
Overview
Based on the spectacularly successful Inspector Montalbano mysteries by Andrea Camilleri, this long-running Italian television series is a huge hit in Europe. Luca Zingaretti stars as the grouchy Sicilian police chief who hates bureaucracy and loves Sicily, justice, his girlfriend, Livia, and Sicilian cooking. Filmed in sun-washed Sicily. Includes "A Nest of Vipers" , "According to Protocol" . 4 hrs, 2 DVDs. Italian with English subtitles.
Episodes
A NEST OF VIPERS
A man arrives at his father's home to find him dead, murdered with a shotgun while drinking coffee in the kitchen. With no sign of forced entry, it's clear the victim knew his murderer. Finding locals with possible motives is easy, because he spent a lifetime exploiting young women and making enemies of fellow townspeople. Montalbano also discovers that the victim wasn't just shot, but had been poisoned hours earlier. It's as if two murderers had decided that night, independently of one another, to kill him.

ACCORDING TO PROTOCOL
A beautiful, beaten woman manages to drive herself to an apartment building, where she collapses and dies in the foyer. Her intent seems to have been to direct investigators to one of the building's tenants. During the investigation - in which Ingrid and Livia meet for the first time - the team uncovers a world of vice and hypocrisy that leaves them all in shock. Montalbano also strikes up a friendship with his new neighbor, a retired judge haunted by the idea that true justice and objectivity may not be possible.