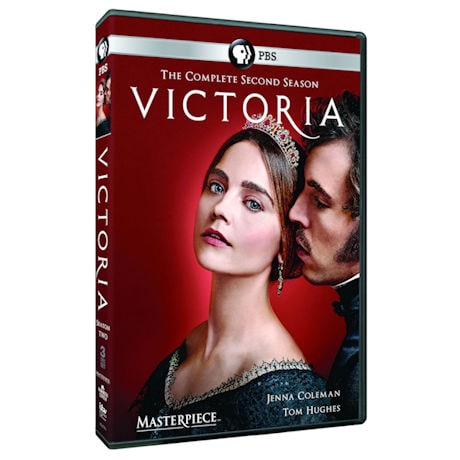 $49.99 Starting at $39.99
Share Me:
add to wish list
Overview
The dazzling series that gives Queen Victoria a whole new image returns for a second season. Jenna Coleman (Doctor Who) is the feisty rookie monarch, asserting her rule over the most powerful nation on the planet, and Tom Hughes (Dancing on the Edge) is her smoldering consort Prince Albert. Dame Diana Rigg (Game of Thrones) joins the acting ensemble and Nell Hudson (Outlander) is back as the queen's personal dresser, Mrs. Skerrett--along with a palace full of schemers and luminaries. The drama all takes place against the backdrop of the early years of the Industrial Revolution, when society was changing as fast as the queen's growing family. 480 minutes.

Episodes
EPISODE ONE (A Soldier's Daughter)
New mother Victoria is impatient to return to the business of ruling a nation, while Albert attempts to protect her from the increasingly desperate news regarding British soldiers in Afghanistan.

EPISODE TWO (The Green-Eyed Monster)
Victoria is thrown into turmoil by the realization that she is pregnant again, and her equilibrium is further threatened by Albert's burgeoning friendship with the lady mathematician, Ada Lovelace.

EPISODE THREE (Warp and Weft)
Discontent is growing, and Victoria throws a ball in a misguided attempt to help the silk weavers. But the spectacular event only exposes her naivety, and an unexpected grief finally forces her to put childish things away for good.

EPISODE FOUR (The Sins of the Father)
Despite giving birth to a healthy Prince of Wales, Victoria finds herself paralyzed by an inexplicable sorrow and is unable to bond with her son. Meanwhile, a tragedy in Coburg plunges Albert into his own private torment.

EPISODE FIVE (Entente Cordiale)
Victoria decides to try her hand at foreign relations, and takes the royal court on an adventure to France, stepping toe-to-toe with the cunning King of the French, Louis Philippe.

EPISODE SIX (Faith, Hope & Charity)
News of the horrific famine in Ireland has finally reached the Queen. She is adamant that her government should be doing more to help, but meets with surprising opposition from her Prime Minister.

EPISODE SEVEN (The King Over the Water)
Feeling suffocated by the weight of the crown, Victoria escapes with her court to the Scottish Highlands. She and Albert revel in the opportunity to be a normal husband and wife, but the holiday can't last forever.

EPISODE EIGHT (The Luxury of Conscience)
Victoria and Albert have to face their worst nightmare as parents, while Peel takes on the ultimate battle in Parliament. When tragedy strikes, they must confront the true cost of standing by your convictions.

EPISODE NINE
Victoria and Albert have very different expectations for a family Christmas, and the arrival of a young African orphan at the Palace puts them at loggerheads.