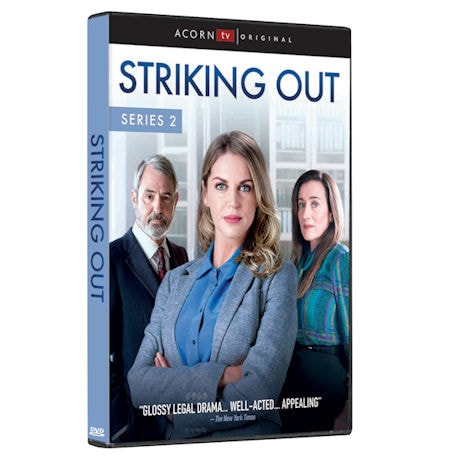 $39.99 $29.99
Buy Both Series, Save 10%
Share Me:
add to wish list
Overview
When Dublin-based attorney Tara Rafferty (Amy Huberman, The Clinic) learns that her lawyer fiancé is cheating on her, she leaves him and their prestigious law firm on the same day. Striking out on her own, she takes a series of cases that often pit her against her former colleagues. Fans of The Good Wife will appreciate this Irish hit, which was expanded to six parts for its second season. With Emmet Byrne (Red Rock), Fiona O'Shaughnessy (Utopia), and Neil Morrissey (Line of Duty). 6 episodes, 5 hrs, 2 DVDs, SDH. Mature content.


Episodes
Episode 1
Following Meg's betrayal, Tara's team has been evicted from the cafe and Ray is in jail. Tara is convinced that Eric's father is behind it all. While working to free Ray, Tara also picks up an immigration case defending a woman scheduled to be deported in a few days' time.

Episode 2
Tara is approached by a father who claims his child's mother should not have custody because she lives in a commune. Vincent lashes out at Tara about the corruption inquiry, and Ray starts his own investigation.

Episode 3
Tara helps an ex-nun suing her order for breach of contract, but the case pits Tara against Eric and the woman he cheated with. Vincent's new witness gives evidence that helps his inquiry, causing anxiety at Dunbar & Calloway.

Episode 4
Tara becomes closer with Eric's brother, Sam, while her office mate, George, defends a family known to be involved in crime, but the case is complicated when Tara accidentally finds damning evidence.

Episode 5
After their fight, Tara and Eric are on opposing sides for difficult repeat clients, when the woman Eric previously represented now wants a divorce from her bigamist husband.


DVD Extras
Behind-the-scenes featurette: Go behind the scenes with cast and crew to find out about what's new in Series 2, filming in Dublin, the actors' costumes, and more. (19 min.)