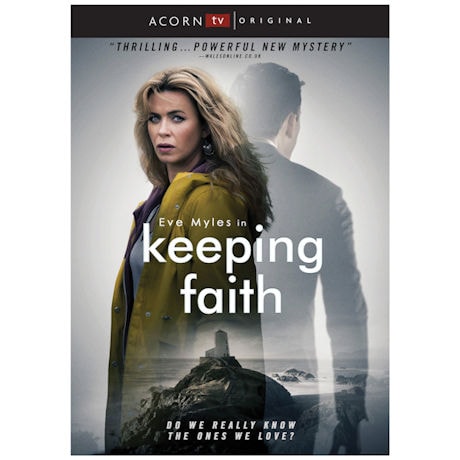 $49.99 $34.99
Share Me:
add to wish list
Overview
Eve Myles (Torchwood, Broadchurch, Victoria) stars as Faith Howells, a small-town lawyer forced to cut short her extended maternity leave when her husband goes missing. As the truth of his actions surface, the seemingly idyllic town on the Welsh coast reveals many dark secrets and Faith must fight to protect her family—and her sanity. 8 episodes, 8 hrs, 3 DVD or Blu-ray discs. SDH. Mature content.
Episodes
Episode 1
While on maternity leave, Faith Howells spends a night out drinking with friends while her loving husband, Evan, takes care of their kids. The next morning, Evan leaves for work but never arrives, forcing Faith to deal with the clients at their law firm.

Episode 2
Evan is officially filed as a missing person, but Faith decides not to tell the police about the fake ID and wig she found in his things. After learning that their law business is heavily in debt, Faith represents reformed criminal Steve in a custody battle.

Episode 3
Having been dragged into the station and questioned about Evan's disappearance, Faith continues to clash with her old adversary DI Susan Williams, despite her police officer brother-in-law, Terry, trying to mediate. Later, Faith defends a priest accused of taking money from the church.

Episode 4
After receiving a threatening letter, Faith takes the kids to stay at a hotel, where Steve tells her that Evan may have had ties to the Glynns, a notorious criminal family. While Faith follows the new lead, the police search for a body but find other evidence instead.

Episode 5
After the police arrive to investigate the break-in at her house, Faith confronts her colleague Cerys, who leads Faith to Dr. Alpay, a dentist involved with the Glynn family. Faith also helps an elderly man whose landlord wants him evicted.

Episode 6
When the police find Evan's car by the docks, a known suicide spot, Williams brings Faith back into the station and locks her in a cell overnight. The next morning, Cerys represents Faith as Williams grills Faith about her relationship with Steve.

Episode 7
Feeling betrayed by her former client Arthur, Faith goes through his phone and finds evidence that Williams was at the scene of the crash that killed Dr. Alpay. Cerys attempts to return Faith's children to her, while Faith gets Steve out on bail.

Episode 8
Even with Williams arrested for fleeing a crime scene, Faith seems to be losing her custody hearing until Cerys deals a low blow to the prosecution's surprise witness. Later, Faith reluctantly makes a tenuous deal with Williams.