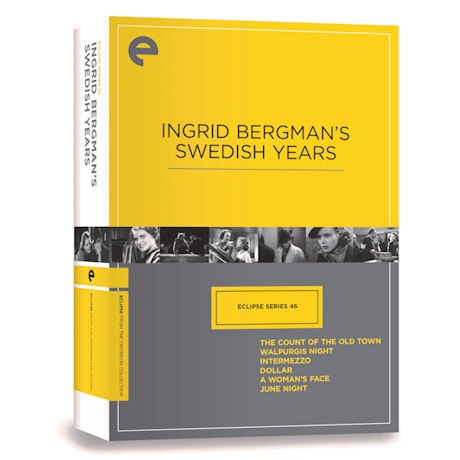 $69.99 $59.99
Share Me:
add to wish list
Overview
You know her from Casablanca and a host of other Hollywood classics, but 3-time Oscar®-winner Ingrid Bergman appeared in eleven films in her native Sweden before the age of twenty-five. These early works showcase passionate performances: comedies, romances, and thrillers, the six fascinating films collected here reveal a young artist with an illustrious international career ahead of her. 8 ½ hrs, 6 DVDs. B&W. Swedish with English subtitles.
Episodes
The Count of the Old Town
Ingrid Bergman's first speaking role was in this hugely charming knockabout comedy, filmed on location in the Monk's Bridge district of Stockholm. Bergman plays an amiable young chambermaid being wooed by a handsome stranger, who may or may not be a jewel thief. Enlivened by cheeky humor and a cast of neighborhood eccentrics, The Count of the Old Town offered Bergman a chance to warm up her all-too-rarely displayed comedy skills.

Walpurgis Night
Lena (Ingrid Bergman) is in love with her married boss, Johan, in this romantic drama that takes Sweden's declining birth rate as a backdrop and stirred up controversy with its depiction of abortion. While Lena dreams of marriage and motherhood, Johan's wife is fiercely unmaternal. Johan and Lena have a chance to be together, but their happiness is threatened by blackmail and murder. The great Victor Sjöström plays Lena's fiercely protective father, a newspaper editor convinced that the population problem will be solved by love, not legislation.

Intermezzo
This gorgeous romantic confection, which catalogs a doomed love affair between a married violin virtuoso and a young pianist, is graced by a leading performance by Ingrid Bergman (her first), in a role created especially for her; a costarring turn by the legendary Swedish actor Gösta Ekman; and beautiful direction by Gustaf Molander. It was a defining part for Bergman, as it made her a star in Sweden and caught the eye of American producer David O. Selznick, who offered the young actor a Hollywood contract and the chance to remake Intermezzo in English with Leslie Howard.

Dollar
Ingrid Bergman excels as the frustrated spouse of a busy industrialist with conservative views about how his wife should behave in public, in this sparkling Swedish take on screwball comedy that touches on dark themes, directed by Gustaf Molander. Three couples retire to a ski lodge, where they quarrel and flirt. The arrival of an American investor stirs the waters and forces revelations, as Bergman's character, who initially appeared to be catty and faithless, is revealed as sweet, sympathetic, and heartbroken.

A Woman's Face
In this dramatic thriller, Ingrid Bergman takes on an uncharacteristically vicious role as Anna, a bitter, nefarious blackmailer with a disfigured face. Gustaf Molander directs, meticulously hiding and revealing Bergman's features as necessary. After Anna is given an operation to restore her looks, she embarks on a scheme that requires her to go undercover as a nanny to a rich family, but as her personality softens and she discovers maternal instincts she never knew she had, her latest plot is put in jeopardy. Joan Crawford would star in the Hollywood remake.

June Night
This noirish romance stars Ingrid Bergman as a shy young woman who is shot by her lover. Following his trial, she begins a new life in Stockholm under an assumed identity, working at a pharmacy and making new friends at the rooming house where she takes up residence. Both a grim exposé of sexual politics and a sensual romance, June Night features a remarkably intense performance from Bergman as a woman weighed down by a secret, symbolized by a scar near her heart, who learns to fall in love again.