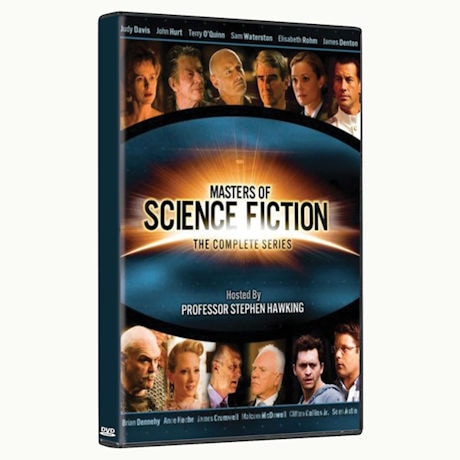 Overview
What do you think the world is going to be like in the future? It's a question that's been under investigation by science fiction writers for a long time. We've seen guesses range from finding friendship with alien life, to suggestions our earth will one day be uninhabitable. The series closely examines scientific extremes we may one day inevitably reach. Professor Stephen Hawking hosts each episode off camera, introducing the questions that society may inevitably have to ask. Never before seen episodes include Little Brother and Watchbird.
Episodes
A Clean Escape: Based on a short story by John Kessel A man walks into a doctor's office suffering from a condition that resets his memory every 40 minutes or so. In a post-apocalyptic future, a psychiatrist tries to help a patient regain his memory.

The Awakening: Based on a short story by Howard Fast The government becomes highly suspicious when something extra-terrestrial crash lands on earth. The subject is thought to be a hoax by skeptics until it takes control of three people to communicate telepathically. The mixed message stirs a lot of debate.

Jerry Was a Man: Based on a short story by Robert A. Heinlein A wealthy couple go to a genetics factory to buy an android called Jerry. Jerry is an ordinary robot scheduled for termination through obsolescence. However, this robot also has thoughts and feelings just like anyone else. He craves candy, cigarettes, always desires to do well, and can even pick out and sing a favorite song.

The Discarded: Based on a short story by Harlan Ellison The 'discarded' are mutations that were abominations on earth. Society couldn't incorporate the ugliness of the mutations into their world, so they put them on a space ship that's kept them out of sight for decade.

Little Brother: Based on a short story by Walter Mosley Machines have replaced the need for traditional judge and jury trials. Set in the future, we are introduced to courtrooms and automated justice is the law of the land.

Watchbird: Based on a short story by Robert Sheckley Watchbird robots, previously used as unmanned weapons for the military, are assigned to aid police forces in a small number of cities. Watchbirds can prevent killings before they happen. However, soon everyone discovers the fragile formula of life and death.