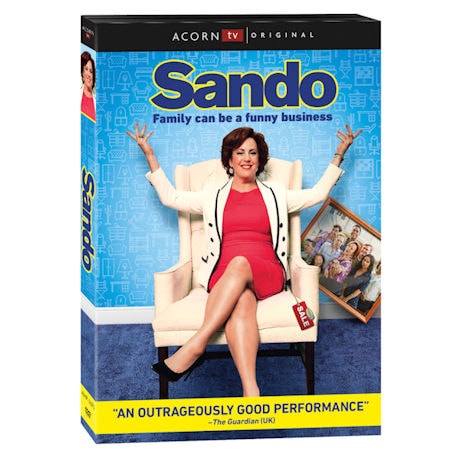 $39.99 $24.99
Share Me:
add to wish list
Overview
Charismatic but conceited Victoria "Sando" Sandringham (Sacha Horler, Jack Irish, Crownies) made a name for herself as the "package deal queen" of her furniture empire. But after an outrageous indiscretion at the wedding of her daughter, Susie (Krew Boylan, A Place to Call Home), Sando's family cut her out of their lives. Ten years later, Sando is being forced out of her company, too. As tension builds in the household, can Sando win back her family and her business, or will her selfishness be a deal breaker? Item can only be shipped within the Continental US.
Episodes
Ep. 1: Prodigal Mum
Ten years after disrupting her daughter Susie's wedding, Victoria "Sando" Sandringham finds herself being forced out of the successful furniture warehouse she founded. Realizing she must make amends with her family, Sando shows up uninvited to her granddaughter's birthday party.

Ep. 2: Sorry
Following the taser incident, Susie is forced to let her mother stay at her house and is further surprised when Sando's son Vic Junior shows up as well. Susie's father, Don, and her best friend, Nicky, try to hide their relationship.

Ep. 3: New Mum
After discovering Don and Nicky's relationship, Sando blackmails them along with Susie's husband, Gary, into helping convince Susie to let her stay. Gary deals with a strange addiction, while Sando's son Eric attempts to join the family business.

Ep. 4: Therapy
Convinced that Sando will never change, Susie challenges her mother to take a therapy session with Nicky, and everyone is surprised by the results. Gary is angry when Susie's ex-fiancé, Kevin, shows up unannounced but later bonds with him.

Ep. 5: Lockdown
Eric wants to ask Nicky out on a date, and Don books a music gig to break out of his image as a jingle writer. Sando's CFO, Tony, threatens to fire her if she doesn't come to the board meeting, but Sando accidentally locks herself in a room with Don.

Ep. 6: Family Business
To save her job, Sando promises the company's board members a new commercial featuring her family. Susie refuses, but Sando convinces Don to write another jingle, as Eric and Vic Junior fight over the starring role.