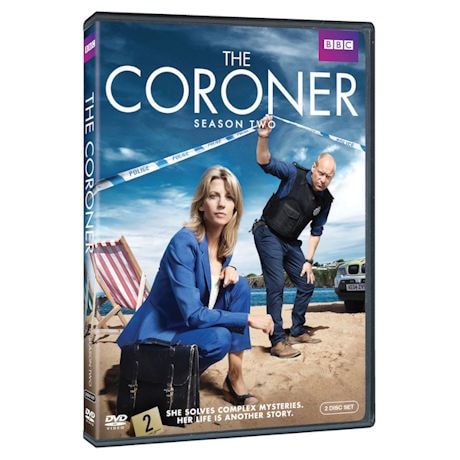 $29.99
Buy Both Seasons, Save 10%!
Share Me:
add to wish list
Overview
Following a messy divorce, big-city lawyer Jane Kennedy (Claire Goose, Waking the Dead) returns to her beautiful coastal hometown to take up the post of Coroner. But are the unexplained deaths she encounters natural, accident, or foul play? These investigations set against a stunning seaside backdrop are imbued with warmth and gentle humor. 10 episodes, 7 ½ hrs, 2 DVDs.
Episodes
Episode 1 — The Drop Zone
Jane's fear of heights is put to the test when she and Davey investigate a skydiving accident and discover that someone has tampered with the parachute.

Episode 3 — Those in Peril
After a hoax callout, a volunteer in the Lighthaven lifeboat crew drowns. Jane suspects foul play, but Davey is sceptical - until other volunteers start to be targeted.

Episode 4 — The Beast of Lighthaven
When a local journalist tries to convince the people of Lighthaven that there is a big cat on the moors, nobody believes him, until the discovery of his mauled body.

Episode 5 — The Captain's Pipe
When Mick's rival landlord is found dead on the beach, Jane is forced to try to clear his name before he is charged with murder.

Episode 6 — Life
A death in custody brings Jane into prison and face to face with notorious child killer Sidney Sutton. Jane starts to hope that she might be able to use this case to find the final resting place of his teenage victim.

Episode 7 — Perfect Pair
The mystery of why a window cleaner is found dead next to a sportscar he doesn't own leaves Jane with questions for a property entrepreneur she suspects is hiding something.

Episode 8 — The Foxby Affair To explain the sudden death of a reclusive woman at a remote address near Lighthaven, Jane must first solve the mysterious disappearance of a notorious, aristocratic playboy from decades before.

Episode 9 — Pieces of Eight
Lighthaven's Pirate Festival provides the perfect cover for a robbery, leaving Davey giving chase while Jane tries to discover why a faceless man has washed up on the beach.

Episode 10 — Crash
Jane is reconnected with an old school friend when she tries to find out who left a teenage girl to die after a car crash.