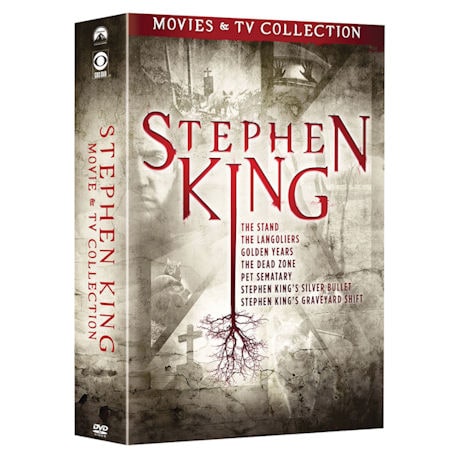 Overview
A killer collection featuring seven films and miniseries based on the work of horror master Stephen King. Set includes The Stand miniseries, The Longoliers miniseries, Golden Years miniseries, The Dead Zone, Pet Sematary, Silver Bullet, and Graveyard Shift. 19 ½ hrs, 9 DVDs. Item can only be shipped within the Continental US.
Episodes
The Dead Zone (1983)
David Cronenberg directs this suspenser from Stephen King's novel about a schoolteacher (Christopher Walken) who awakens from a five-year coma to discover he has the ability to see a person's future simply by coming into physical contact with him or her. When he's recruited to help the police solve a murder, the horrific psychic visions he experiences make him wonder if his new abilities are a gift or a curse. Brooke Adams, Tom Skerritt, Herbert Lom, and Martin Sheen star. 103 min.

Stephen King's Silver Bullet (1985)
Based on the Stephen King novella "Cycle of the Werewolf," this intense chiller concerns a small town with a hairy problem. When the residents in the community become terrorized by a werewolf, a paralytic boy, his older sister, and his uncle are forced to try to stop the beast at all costs. Gary Busey, Everett McGill, Corey Haim, Megan Follows star. 95 min.

Pet Sematary (1989)
Spirits moan among the tombstones as Stephen King adapts his own best-seller about a mysterious Indian burial ground with resurrective powers. After the graveyard brings the Creeds' cat back from the dead, the family patriarch hopes it will do the same for his recently deceased son. But when the boy returns as a bloodthirsty murderer, it's up to dad to stop his reign of terror. Dale Midkiff, Denise Crosby, Brad Greenquist, and Fred Gwynne star. 103 min.

Stephen King's Graveyard Shift (1990)
From the chillingly prolific pen of Stephen King comes this terrifying tale about a small town where several employees at a recently reopened textile mill have mysteriously died...all during the overnight shift. And when a new hire is sent into the building's basement to deal with a rat infestation, he discovers an underground labyrinth that is home to a giant monster that just might be to blame for the mill's gruesome turnover rate. David Andrews, Kelly Wolf, Stephen Macht, and Brad Dourif star. 88 min.

Golden Years (1991)
Caught in an explosion at the research lab where he works, an elderly janitor receives the "gift" of slowly growing younger. Now he must run for his newly extended life from the government and corporation officials who want to learn his secret...at any cost. This special edition of Stephen King's suspenseful TV series includes the never-broadcast ending. Keith Szarabajka, Frances Sternhagen, Ed Lauter star. 4 hrs. on 2 discs.

The Stand (1994)
The end of the world is just the beginning in the stunning miniseries based on Stephen King's apocalyptic bestseller. A biowarfare experiment goes awry, wiping out nearly all of the world's population, and the remaining survivors are drawn by unknown forces towards the ultimate showdown between the powers of good and evil. Gary Sinise, Molly Ringwald, Jamey Sheridan, Laura San Giacomo, Rob Lowe star. 6 hrs. on 2 discs.

The Langoliers (1995)
In this eerie adaptation of Stephen King's novella, 10 people on a red-eye transcontinental flight awaken to discover that the rest of the plane's passengers and crew have disappeared. Managing to land the jet at a deserted airport, the group tries to unravel where--and when--they are, while mysterious entities dubbed "the Langoliers" draw ever closer. David Morse, Patricia Wettig, Dean Stockwell, and Bronson Pinchot star. 179 min.