The Durrells in Corfu: Season 3 DVD 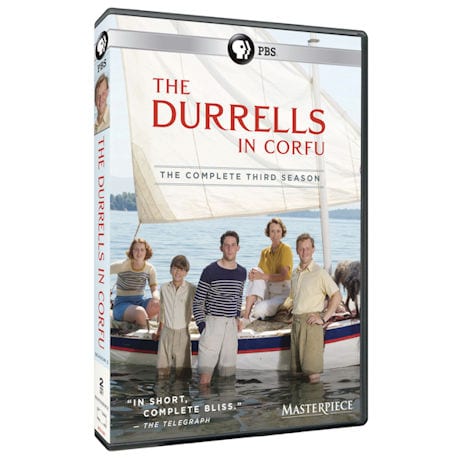 The Durrells in Corfu: Season 3 DVD

$39.99 $39.99
Buy 2 or More Seasons, Save 10%
Share Me:
add to wish list
Overview
Follow the further adventures of the eccentric Durrell family as they embrace life on the gorgeous Greek island of Corfu. Based on Gerald Durrell's trilogy of Corfu novels, this latest series features a visit from formerly formidable Aunt Hermione (Barbara Flynn, Cranford), who has embraced the laid-back Greek attitude and found romance. As for Louisa (Keeley Hawes, Line of Duty), after a brush with bohemian London artists, she realizes her heart lies in her island paradise. 8 episodes, 6 hrs, 2 DVDs.
Episodes
Episode 1
Louisa tries to persuade Leslie to get rid of two of his three girlfriends, Margot to find a hobby, and Gerry to get rid of some of his pets.

Episode 2
When Aunt Hermione dies suddenly, Louisa has to accompany her body back to England. Leslie may have gotten one of his girlfriends pregnant.

Episode 3
Louisa and Larry arrive in England for Aunt Hermione's burial while the rest of the family keeps things running not so smoothly in Corfu.

Episode 4
Larry's friend Gigi comes to visit, as does Captain Creech, who has fallen on hard times. Louisa wants Gerry to go to school, and Leslie has to decide whether to report someone to the police for smuggling.

Episode 5
A new Italian family, the Ferraris, takes up residence in Corfu, taking up more of Spiro's time than Louisa would like. They seem to have left Italy in a hurry, and everyone wants to find out why.

Episode 6
It's Gerry's birthday and Louisa wants to have a party and make a fuss even though he doesn't want to. She fails to realize that Gerry is growing up.

Episode 7
Writer Henry Miller visits Larry on Corfu, and Sven is under scrutiny from the police for being gay, Leslie is forced to arrest him ,causing conflict in the Durrell household.

Episode 8
Leslie and Margo have news about their relationships, and as Louisa and Spiro grow closer, a circus comes to town.