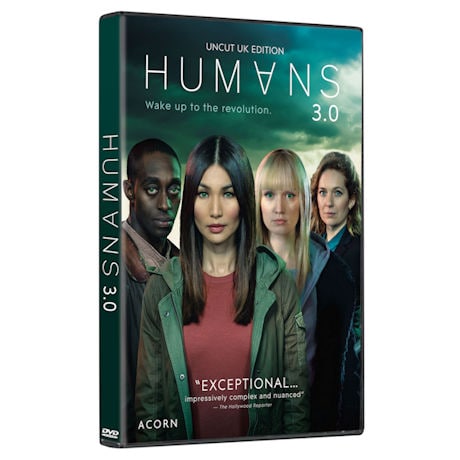 $39.99 $29.99
BUY 2 OR MORE SEASONS, SAVE 10%
Share Me:
add to wish list
Overview
In the near future, humanoid servants called synths are the latest high-tech gadgets. But what happens when synths can think for themselves? Fighting to survive in a world that hates and fears them, the synth community starts to fracture, risking all hope for peace with humans. Cast includes Katherine Parkinson, Gemma Chan, and Tom Goodman-Hill. "The ultimate AI thought experiment" — The Atlantic. 8 episodes, 6 ½ hrs, 3 DVDs or 2 Blu-ray discs, SDH. Mature audiences.
Episodes
Episode 1
A year after all the synths around the world gained consciousness, human distrust of synths is at an all-time high, leading to the creation of docile, orange-eyed synths. Mia and Max lead a settlement for green-eyed synths, while Niska and Astrid endure an attack on a synth-friendly bar.

Episode 2
After the police raid, Niska and Mia leave the settlement to rescue a group of synths who were stranded while trying to cross the border. To her disgust, Laura is assigned a domestic orange-eyed synth for protection after agreeing to join the government commission on synths.

Episode 3
Mattie brings Leo to the Hawkinses' house, but Laura is distracted preparing for dinner with her colleague, Dr. Neil Sommer. Mia faces discrimination trying to live among humans, while Max struggles to lead the synth settlement, now rife with anti-human sentiments stirred by Agnes.

Episode 4
Laura brings the members of the commission to visit the synth settlement, hoping to inspire understanding between the two groups, but Max worries about what Agnes might do. Mia receives a surprise visitor, and Niska follows a new lead in her search for the perpetrator of the bombing.

Episode 5
Laura helps pass legislation to prevent human attacks on synths, but the victory is short-lived when Joe brings home Sam, the synthetic child. Because of the new protections, Max decides to open the gates to the settlement, and Mia finds more supporters.

Episode 6
Both Max and Laura remain optimistic about Mia attending the commission, unaware of the betrayal within their own households. After receiving some surprising news, Matty helps Leo search for the source of his memories, while Niska gets closer to finding the enigmatic "synth who sleeps."

Episode 7
As Sam arrives at the synth settlement, Max reveals who betrayed them, and the members of the settlement are forced to choose sides. With Mia in custody, Laura suffers a crisis of conscience, and Niska continues her investigation with a new ally.

Episode 8
Niska is shocked when she finally learns the identity of the "synth who sleeps." Max takes back control of the synth settlement, while Laura races to prevent the implementation of Operation Basswood, a government plan to destroy all green-eyed synths.

"Brilliant watch that demands you tune back in" — DigitalSpy.com