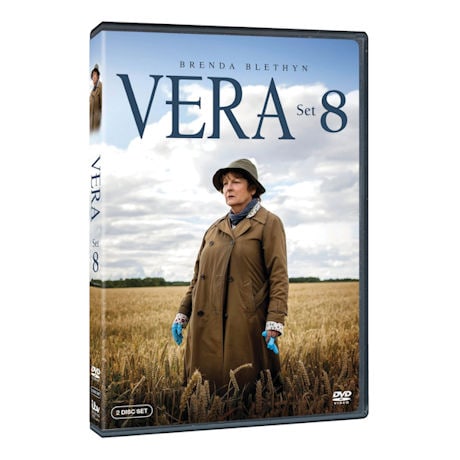 $59.99
Share Me:
add to wish list
Overview
As disheveled and indomitable as ever, DCI Vera Stanhope leads her tightly knit team of Northumberland police through four more daunting cases. The complete eighth series of the crime thriller based on the novels by Ann Cleeves. No one seems to know anything about the murder of a police officer, a mysterious car crash meant to look like an accident or the suburban neighbor found dead in her back yard. BAFTA and Golden Globe award-winner Brenda Blethyn (Atonement, Pride & Prejudice) keeps you guessing. 4 episodes, 2 DVDs, 6 hours. We regret we cannot ship Vera Set 9 to Canada.

Item can only be shipped to US destinations.
Episodes
Episode 1 Blood and Bone
DCI Vera Stanhope is called to investigate charred remains in an abattoir furnace.

Episode 2 Black Ice
Vera is called to the scene of a violent car crash. With her sharp skills of observation, Vera quickly realizes that the crash was not an accident.

Episode 3 Home
Quiet life in suburbia takes a dark turn when a woman is discovered lying dead in her back garden.

Episode 4 Darkwater
DCI Stanhope is confronted with a tragic mystery when the dead body of teenager Ethan Dewley is found floating in a reservoir.