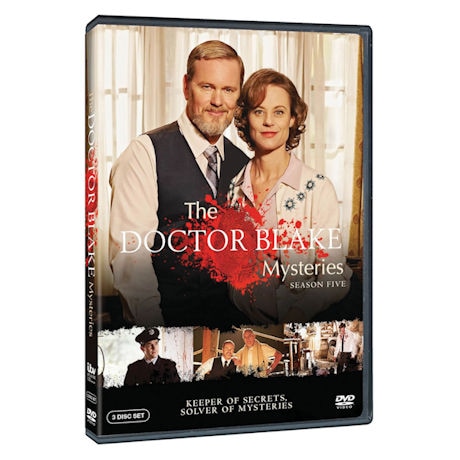 $39.99
Share Me:
add to wish list
Overview
A huge ratings hit in Australia. Doctor Lucien Blake (Craig McLachlan) and his housekeeper Jean Beazley (Nadine Garner) now face a new future together. Once again they'll be confronted by murder and mystery at every turn. From the boxing ring to a new French bistro, from an exotic camp of travelling Romani gypsies to the local Debutante Ball. 8 episodes, 8 hrs, 2 DVDs. Mature content.
Episodes
Episode One — A Lethal Combination
A boxing match turns sour when a fighter is seemingly beaten to death by his younger, far less-experienced opponent…Charlie's brother, Ray.

Episode Two — Sorrow Songs
When Blake investigates the murder of an exotic young gypsy woman on the edge of Ballarat, troubling secrets bubble to the surface.

Episode Three — The Call Of The Void
When a body is found in the kitchen of Ballarat's new French restaurant, a member of the Police Department soon finds himself shaping up as the prime suspect.

Episode Four — All She Leaves Behind
When a controversial writer is found dead, seemingly part of a murder-suicide pact, Blake must determine whether her latest work has anything to with her death.

Episode Five — Measure Twice
Blake is called to investigate the murder of a retired carpenter, where his only suspect is discovered praying over the body and covered in blood.

Episode Six — First Dance
Despite being housebound as he recovers from being stabbed, Blake investigates the death of a teenage girl at her Debutante Ball.

Episode Seven — A Good Drop
As Blake investigates the murder of a farmer and a mysterious case of arson, an unlikely party suddenly throws his future with Jean into chaos.

Episode Eight — A Time For Every Purpose
The death of a policeman coincides with the reappearance of an old enemy, as the past and the present begin to finally catch up with Blake.