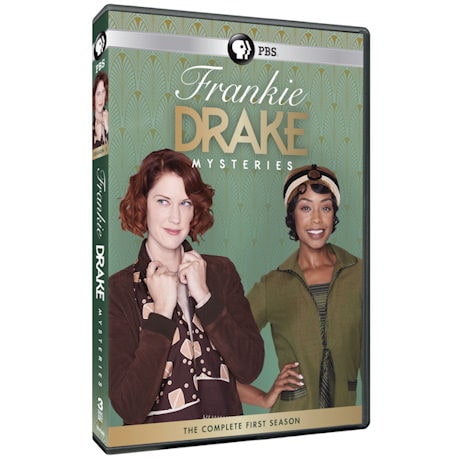 $49.99
BUY BOTH SERIES, SAVE 10%
Share Me:
add to wish list
Overview
Frankie Drake (Lauren Lee Smith) and her partner Trudy Clarke (Chantel Riley) are the Drake Private Detectives, the only all-female detective agency in 1920s Toronto. Their fearless sense of adventure has them fighting crime in the age of flyboys, gangsters, rum-runners, and speakeasies. "Thanks to its charm and the frocks, skirts, suits and, well, the gorgeous furniture, it's frightfully good entertainment" —The Globe and Mail. 11 episodes, 8 hrs, 3 DVDs, SDH.
We are unable to ship this title to Canada.


Item can only be shipped within the Continental US.
Episodes
EPISODE 1: Mother of Pearl
Frankie partners with a surprising ally when she's named as the number one suspect in a robbery that looks like the work of her dead father.

EPISODE 2: Ladies in Red
Frankie and Trudy are hired by a factory owner to root out communists at his plant, but things soon take an explosive turn.

EPISODE 3: Summer in the City
When a body turns up in the luggage of a young man, the case brings Frankie and Trudy into Toronto's elite social circles.

EPISODE 5: Out of Focus
Frankie and Trudy go undercover in the glamorous world of film in order to solve a seemingly impossible murder on a silent movie set.

EPISODE 6: Whisper Sisters
After a shooting injures the young son of a friend, Frankie and Trudy's investigation leads them into the dangerous world of bootlegging.

EPISODE 7: Ties that Bind
Mary recruits Frankie and Trudy to find a missing teacher, but their investigation leads them to family secrets, Chinatown, and murder.

EPISODE 8: The Pilot
A day off turns into a day at the office for Frankie and Trudy when the infant son of a charismatic aviator is kidnapped during an air show.

EPISODE 9: Ghosts
The horrors of war haunt Frankie when an investigation into a soldier's murder reunites her with a friend left traumatized by his tour of duty.

EPISODE 10: Anastasia
Frankie is hired to confirm the identity of a young woman claiming to be a Russian princess and protect her from those who want her dead.

EPISODE 11: Once Burnt Twice Spied
When Frankie gets a mysterious call from a British spy, Mary discovers how she and Trudy met, and how Drake Private Detectives was formed.