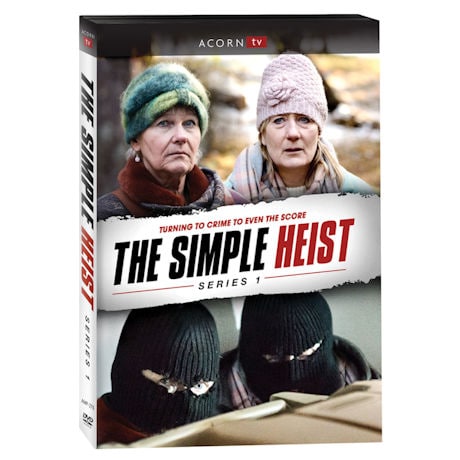 $39.99
Share Me:
add to wish list
Overview
When two friends facing their older years find themselves increasingly overlooked, they turn to crime to even the score. As Jenny (Lotta Tejle) struggles to stay afloat during her divorce, she teams up with the similarly cash-strapped Cecilia (Sissela Kyle) to rob a bank. This Swedish-language dramedy combines crime caper with a deft comedic touch. 6 episodes, 5 hrs, 2 DVDs. Swedish with English subtitles.
Episodes
Episode 1: The Plan
A failed stock investment leaves gastroenterologist Cecilia in financial difficulty, but she can't bring herself to tell her husband, Jan. When Cecilia learns of a bank robbery plan from Stellan, a dying patient, she seeks to recruit her friend Jenny, a teacher going through a costly divorce.

Episode 2: Casing the Bank
Jenny and Cecilia prepare for the robbery in Stockholm by following a bank worker to learn how to get into the bank and drugging him to get the access card. But things start to go awry once their plan is put into action.

Episode 3: Locked Away
Although the robbery was successful, Cecilia and Jenny struggle to open the locked cassettes containing all the money. As Cecilia tries to put off Jan from buying their dream house in France, Jenny worries her daughter Harriet is using drugs.

Episode 4: Blackmail
Jenny panics when the police find the empty cassettes, and Cecilia's relationship with Jan breaks down after he learns that Cecilia invested their life savings. The women's problems multiply when Cecilia starts to receive threatening emails.

Episode 5: Double-Crossed
Cecilia and Jenny agree to share the money with Stellan, but before they can give it to him, they are burgled by the criminals who helped them open the cassettes. Cecilia is forced to bring her grandchildren on a stakeout and discovers that the criminals are involved with a dangerous biker gang.

Episode 6: Hot Pursuit
With the money back in their possession, Cecilia and Jenny wait for Stellan to collect his share, but Jenny is called away to take care of a brokenhearted Harriet. Believing the police to be on their trail, Cecilia and Jenny debate turning themselves in.