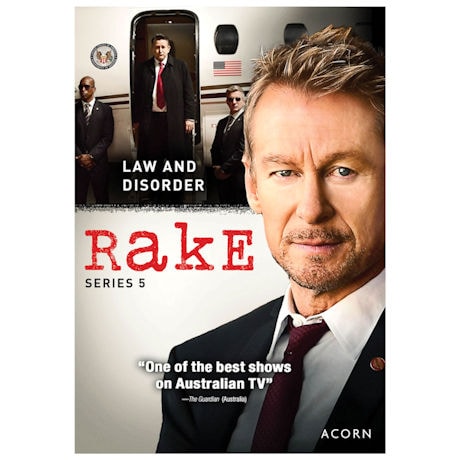 $39.99 $29.99
Buy 2 or More Series, Save 10%
Share Me:
add to wish list
Overview
The final season of this "ever-sparkling comedic drama" (The Guardian) tackles the contentious world of politics, with disreputable lawyer Cleaver Greene (Richard Roxburgh, Moulin Rouge!) having won an Australian Senate seat on a campaign promise to do nothing. But even Cleaver's low expectations fall short as he contends with cutthroat colleagues and career threatening foes. 8 episodes, 8 hrs, 3 DVDs, SDH. Mature audiences. Item can only be shipped within the Continental US.
Episodes
Episode 1: Greene v The World
Now a senator in Canberra, Cleaver makes waves with an unconventional maiden speech and causes the resignation of the governor general. After a noxious gas attack on New Parliament House, government officials are forced to relocate to the old Museum of Australian Democracy.

Episode 2: Greene v The United States
When the American defense secretary goes missing after partying all night with Cleaver, the US Secret Service frame Cleaver in a sexting scandal. As Cleaver tries to clear his name, Australian officials scramble to sign a peace treaty.

Episode 3: Evans v Greene
After forgetting his suit at a costume party, Cleaver is forced to perform his senatorial duties in a zebra costume, making an enemy of his right-wing colleague, Senator Penny Evans. Wendy starts to lose her grip after an argument with Missy, until she receives a job offer in Canberra.

Episode 4: Gold & Greene v Red
Penny serves Cleaver with a defamation suit, while Parliament is embroiled in a heated debate about the future of an iconic Australian ice cream. Cleaver faces staffing issues when Missy shows up at his house under the impression that she is his new press secretary.

Episode 5: Greene v Diaries
Unaware of a new memo mandating all politician's schedules must be released to the public, Cleaver attends a rugby game and meets with a video game lobbyist who looks familiar. David visits Wendy's practice, and Cleaver faces pressure from both sides on the vote for the prime minister's treaty.

Episode 6: Greene v The Unflushables
A catastrophic plumbing problem at Cleaver's house inadvertently brings Cleaver into the government gas-explosion cover-up. Ahead of his date court date with Penny, Cleaver falls into more debt with his driver, Jakub.

Episode 7: Greene v Midwinter
As war with China and a cabinet reshuffle loom, politicians prepare for the annual Mid-Winter Ball. Cleaver searches for a date, but he has bigger problems when a journalist finds out that he has been renting out his government-paid apartment for profit.

Episode 8: Greene v The Reckoning
After single-handedly causing the breakdown of Australian-Chinese diplomacy, Cleaver is evicted, and Jakub calls in his debt. To further complicate matters, Fuzz returns home and runs into Missy, while Nicole faces legal problems.