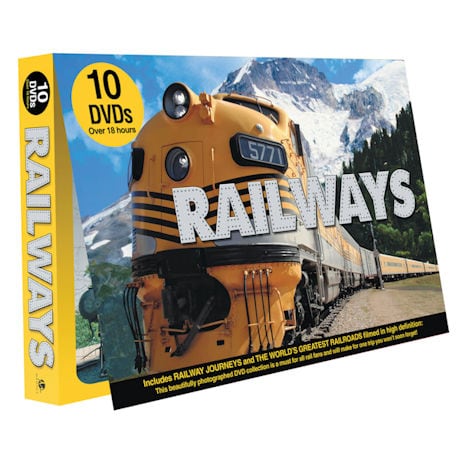 Overview
Prepare for the ride of your life as this action-filled, full color collection puts you in the conductor's seat on some of the world's most legendary trains and rail lines. Mega set for railway fans features previously unseen footage from the glory days of the steam engine, modern adventures on the Polar Express, the rails of New Zealand, the trains of Cuba, and more. Over 18 hrs, 10 DVDs.
Episodes
Contains RAILROAD JOURNEYS: THE VANISHING AGE OF STEAM (5-PK) and THE WORLD'S GREATEST RAILROADS (5-PK)

RAILROAD JOURNEYS: THE VANISHING AGE OF STEAM: This lavish production takes you on the ride of a lifetime aboard some of America's legendary steamers. Ride through never-before-seen footage from steam's heyday in the 1920s, '30s and '40s and behold legendary steam trains as they make their way across America, from the steam shortlines of the South, to the Colorado narrow gauge through the Rio Grande and north to the trains of the Canadian Pacific Railroad. Marvel at logging steamers as they make their way through winter blizzards and the breathtaking colors of spring and fall and witness the steam era wind down in the '50s, '60s and '70s.

THE WORLD'S GREATEST RAILROADS: Get set for the ride of your life that puts you in the conductor's seat on some of the world's most legendary trains and rail lines. From the Texas State Railroad to the Polar Express and from the railroads of New Zealand to the trains of Cuba, this collection circles the globe to bring you a cavalcade of rail routes.
Details
Packaging: Boxed
Run Time: Over 18 hours
Format: Full Screen
Number of discs: 10
Language: English
Foreign Language Subtitles: No
Color or B&W: Color
CC: No
SDH: Yes
Region Code: 1
Aspect Ratio:
Audio Format: 2.0 Dolby Stereo
Rating: NR