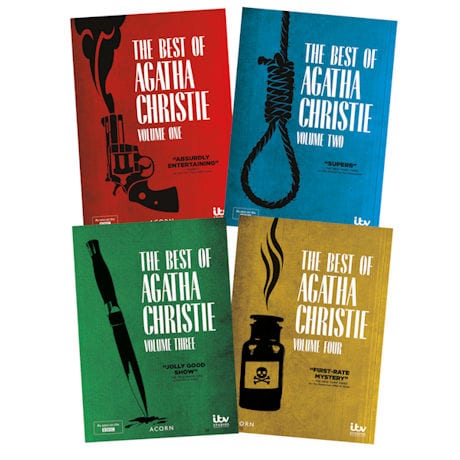 $159.96 $119.99
Share Me:
add to wish list
Overview
Made for British television, these splendid adaptations of the Queen of Crime's best works feature stellar casts and lavish period detail. 13 films in all, including 8 starring David Suchet as the quintessential Poirot, 3 Marple mysteries showcasing both Geraldine McEwan and Julia Mackenzie as Christie's shrewd lady sleuth, a critically acclaimed version of And Then There Were None (Charles Dance, Aidan Turner, Sam Neill, Miranda Richardson), and more. See episodes tab for complete title list. Four volumes. Each volume is over 5 hours on 2 DVDs, SDH. Mature content.
Episodes
Volume 1:
And Then There Were None
On the brink of WWII, 10 strangers are invited to an isolated island—and by the end of the night, the first of them is dead. Starring Charles Dance (Game of Thrones), Aidan Turner (Poldark), Sam Neill (Jurassic Park), and Miranda Richardson (Parade's End).

Volume 2:
The Witness for the Prosecution
When an heiress (Kim Cattrall, Sex and the City) is brutally murdered, all the evidence points to her young lover (Billy Howle, On Chesil Beach). But he insists to his solicitor (Toby Jones, Detectorists) that his wife (Andrea Riseborough, Bloodline) can prove his innocence.

Volume 3:
Partners in Crime: The Secret Adversary
In this sparkling adaptation, David Walliams (Little Britain) and Jessica Raine (Call the Midwife) portray charming crime-solvers Tommy and Tuppence Beresford, who stumble into spy craft while searching for a missing woman in Cold War-era Britain.

Ordeal by Innocence
Miss Marple (Geraldine McEwan, The Magdalene Sisters) is drawn into the Argyle family's tragic history when she visits for a wedding and realizes a murderer is in their midst. Jane Seymour (Dr. Quinn, Medicine Woman), Richard Armitage (The Hobbit films), Juliet Stevenson (The Politician's Wife), and Gugu Mbatha-Raw (Belle) also star.

The Hollow
Invited for a weekend in the country with the Angkatell clan, Poirot (David Suchet) untangles the family's love affairs in the quest for a killer. Also starring Jonathan Cake (Desperate Housewives) and Edward Fox (Gandhi).

Volume 4:
The Mysterious Affair at Styles
Poirot (David Suchet) and Hastings (Hugh Fraser, Sharpe) tackle their first case together when a wealthy old woman is poisoned.

The Mirror Crack'd from Side to Side
Miss Marple (Julia McKenzie, Cranford) ponders a cast of suspicious characters when a villager dies at a party hosted by a movie star (Lindsay Duncan, Sherlock). Joanna Lumley (Absolutely Fabulous) also stars.

A Caribbean Mystery
After the death of a fellow guest at a posh hotel, Miss Marple (McKenzie) unravels a web of dark magic and deceit.