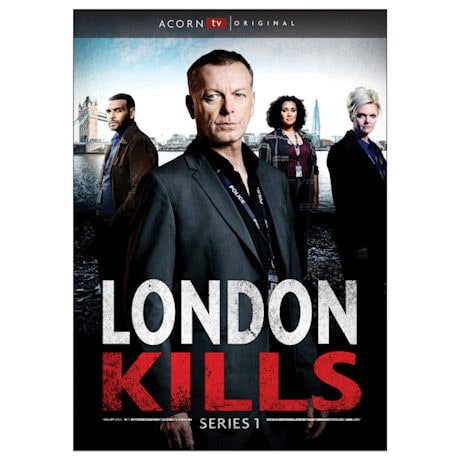 $39.99 $29.99
Share Me:
add to wish list
Overview
DI David Bradford (Hugo Speer, Father Brown) returns to work after taking a leave of absence following his wife's disappearance. Ambitious DS Vivienne Cole (Sharon Small, Inspector Lynley Mysteries) has been running the murder team in the interim, and is frustrated by his approach to their investigations. With the world's most recognizable city as its backdrop, each episode features a different murder following the detectives as they uncover the truth behind the disappearance of Bradford's wife. 5 episodes, 5 hrs, 2 DVDs or Blu-ray discs, SDH. Item can only be shipped within the Continental US.
Episodes
Espisode 1: The Politician's Son
DC Rob Brady and Trainee DC Billie Fitzgerald respond to a gruesome scene: a man found stabbed multiple times and left hanging from a tree. DS Vivienne Cole expects to lead the investigation but is shocked when DI David Bradford takes over, as he has been on leave since the disappearance of his wife.

Espisode 2: Stag Night
A groom is killed at his bachelor party, and the man who reports the crime is the ex-husband of the bride. The detectives race to find the missing 18-year-old best man, who may have been the killer or another victim.

Espisode 3: Blood Lines
A man is found murdered on his houseboat, but the woman who alerted police has fled the scene. When Vivienne and Billie question the victim's widow, they discover he was having an affair with his best friend's wife.

Espisode 4: Sex Games
When the body of a woman turns up by the river, the detectives track a suspect through a dating site, only to find he may have shot himself. While Rob and Vivienne disagree about whether it was a murder-suicide, Billie worries about Amber, a witness in another case.

Espisode 5: Connected
With Billie stabbed and her attacker on the loose, Vivienne blames herself for not recognizing that Billie was in danger. As the team scrambles to track down Amber, they discover that there's more to her than meets the eye.