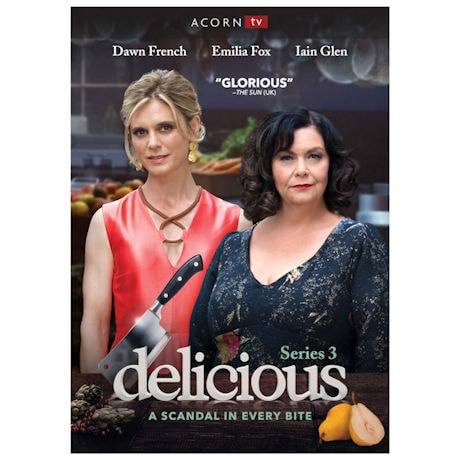 $34.99
BUY 2 OR MORE SERIES, SAVE 10%
Share Me:
add to wish list
Overview
Food and love meet in this lavish British dramedy set amid spectacular Cornwall landscapes. In series three, Gina (Dawn French, The Vicar of Dibley) and Sam (Emilia Fox, Pride and Prejudice) seem to finally have found a way to work together in running the Penrose Hotel. But the arrival of a rich and handsome restaurateur (Vincent Regan) threatens all that they have worked for. 4 episodes, 3 hrs, 1 DVD, SDH. Mature content.
Episodes
Episode 1: The Heart
Sam and Gina throw a glamorous charity auction to raise funds for Sam's spa, but the evening is overshadowed by the attendance of controversial restaurateur Mason Elliot. Teresa arrives home early without Michael but with big changes on the horizon.

Episode 2: Betrayed
Sam is shocked to find that Mason bought her spa location and feels even worse when she discovers his relationship with Gina. While Teresa and Mimi hide each other's secrets, Sam reconnects with her old flame Marc, who is in town for a friend's wedding.

Episode 3: Not Intimidated
Gina and Sam team up to sabotage Mason's business, but they don't anticipate his swift retaliation. Sam has second thoughts about her budding relationship with Marc, and Mimi finally shares her news, along with a surprising request.

Episode 4: Do What Feels Right
As Mimi prepares for her surgery, tensions at the hotel run higher than ever. Sam tries to mend things with Marc, unaware he has a secret of his own. Teresa confesses to Sam, but it blows up in her face when Sam decides to leave the hotel for good.

Sheila Hancock (The Boy in the Striped Pajamas)


Press
If you like shows about rich people having affairs, shows about food or British shows with Game of Thrones actors, consider this your personal jackpot." — The New York Times

"Absolutely worth your time…great performances and smart direction" — Eater