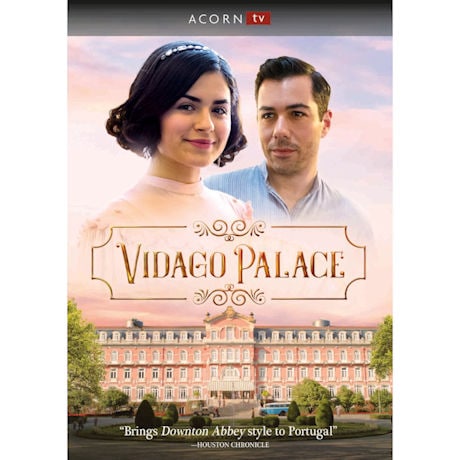 $39.99 $27.99
Share Me:
add to wish list
Overview
Set in 1936 at Portugal's opulent (and real-life) Vidago Palace Hotel, this lavish, award-winning drama tells the story of Carlota de Vimieiro, a young aristocrat engaged to marry the wealthy César in order to save her family from bankruptcy. With the Spanish Civil War breaking out just across the border, and an unexpected romance in the air, Carlota's life is about to change. 6 episodes, 5 hrs, 2 DVDs. Portugese with English subtitles. Content is for mature audiences.
Episodes
Episode 1: Fateful Encounter
Beautiful young Carlota de Vimieiro hails from one of Portugal's most esteemed aristocratic families, but bankruptcy threatens their future. Her impending marriage to César da Silva, the son of wealthy Brazilian plantation owners, will save them. But she has secretly fallen for Pedro, the son of the Vidago Palace Hotel's concierge.

Episode 2: Left Behind
As Pedro lies wounded and unconscious in the woods, his fellow fugitives Dolores and X - an believe him dead and head to the Vidago Palace to inform his parents. Unaware of what has happened, Carlota is confused why Pedro went to Spain and confides her feelings about him to her best friend, São, who happens to be César's sister.

Episode 3: The Rescue
Carlota finds Pedro and rushes to the hotel to get medical help. Dolores and X - an are delighted to discover that Pedro is alive, but their happiness is dashed when they learn that Pepe has been taken prisoner by Inspector Lopes. Carlota tries to put thoughts of Pedro aside and focus on her upcoming wedding to César.

Episode 4: Confessions
Carlota and Pedro have much to discuss, but her mother, Livia, interrupts them before they have the chance. With São's help, Carlota manages to ditch her mother and meet Pedro, and the misunderstandings and manipulations the pair have endured come to light.

Episode 5: Family Pressure
With their love for each other now cemented, Carlota and Pedro are determined to be together. But when X - an needs Pedro's help, he decides to cross the border again, despite Carlota's misgivings. Meanwhile, the da Silvas pressure César and Carlota to marry, against the wishes of both the young people.

Episode 6: The Wedding
With Pedro and Dolores in Lopes's custody, Carlota believes she must marry César to save Pedro's life. Dismayed by her friend's sacrifice, São rebels against both their mothers' blackmail to no avail. Then on the day of the wedding, Carlota is horrified to learn Lopes's true intentions.