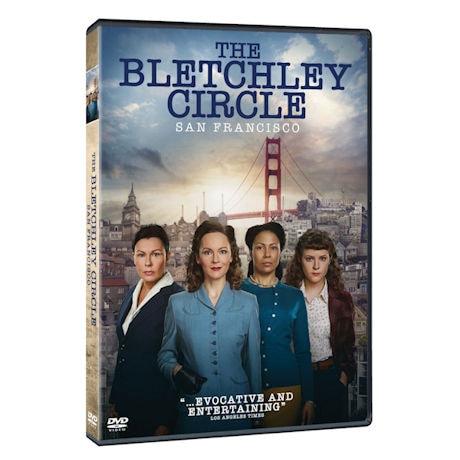 $34.99
Share Me:
add to wish list
Overview
Two former members of England's secret WWII code-breaking team head to San Francisco, where two women have been murdered in circumstances identical to earlier London crimes. Jean McBrian (Julie Graham, Shetland) and Millie Harcourt (Rachael Sterling, The Young Victoria) team up with American code-breakers as they face local corruption and cold war treachery in an effort to bring an elusive killer to justice. 8 episodes, 6 hrs, 1 DVD.
Episodes
Episode 1. Presidio - Millie Harcourt and Jean McBrian travel to San Francisco and join forces with two American codebreakers - Iris Bearden and Hailey Yarner - to pursue a serial killer from their war days, who has resurfaced in the United States.

Episode 2. Wake - Millie, Jean, Iris, and Hailey continue their complex investigation that has spanned two continents, but can they crack the codes before the killer hits close to home?

Episode 3. Charlotte's Web - Our four women delve into the mysterious death, uncovering a complex cluster of marriages built on lies and deception. In her quest to forge a new life, Millie must confront a long-lost cousin, who may hold the key to a future in San Francisco.

Episode 4. Madhouse - After a seemingly innocent man is charged with murder, the women become enmeshed in a tangled suburban tragedy, racing to find both the true killer and the methods before the scent goes cold. Jean meanwhile grapples with how - and where - to build a new life for herself.

Episode 5. Not Cricket - A bloodied and battered stranger collapses on Millies doorstep, dragging them into a mysterious criminal underworld. In a race against time, the four women must unravel the patterns behind a series of attacks in order to avoid becoming the next victims.

Episode 6. Iron in War - Having uncovered a covert system of police corruption, the women must go it alone, crafting a complex sting operation in order to draw out two warring factions and see justice done. Time is precious, as their investigations have triggered deportation proceedings that could soon send Jean and Millie back to the UK.

Episode 7. Fog of War - When a Russian diplomat dies, the FBI sweep in to control the story and rule the death accidental. Iris is forced to get involved to protect her family. Hailey meanwhile befriends a world-renowned visiting cellist, and all four soon find themselves embroiled in a dangerous international firestorm.

Episode 8. In for a Pound - A death in the Big Bop Club brings an international incident right to their doorstep. Reeling from betrayals, Iris and Hailey work with Millie to plan a daring undercover operation to find Jean and expose Cold War treachery.


DVD Extras
Cast Interviews - Immerse yourself in the world of The Bletchley Circle: San Francisco as the cast reflects on how post-war history shaped their performances.

Bonus: Trailer - Picking up in 1956, the new series finds two of the original lead characters, Millie and Jean, as they travel to America and join forces with two U.S. codebreakers to tackle a string of new murder cases.